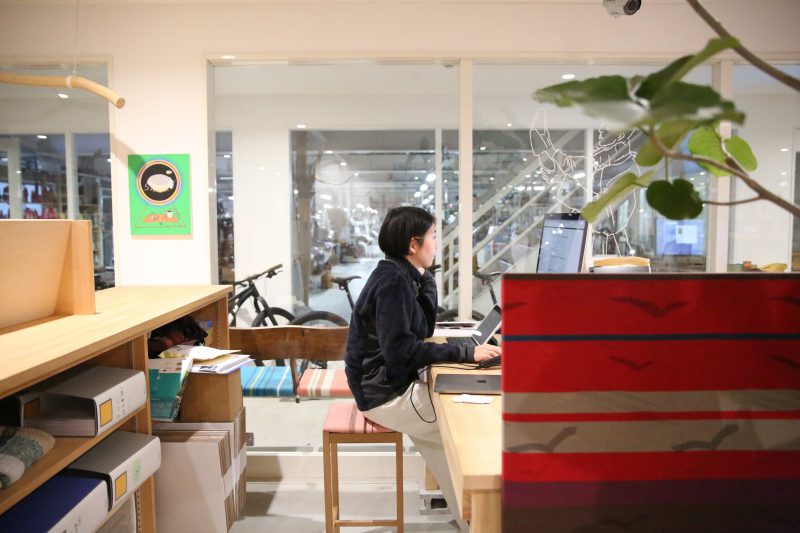 This time, the “niime encyclopedia”, is the “Wa team” volume. What is the “Wa（わ） team”? What on earth are they doing?? Let’s get started. Hiroko Motooka, the youngest team leader, entered the tabe room, and we started the interview.

——Though she is the youngest, Ms Motooka is the most senior member of the team, isn’t she?

Motooka
It’s been about two and a half years now. I was originally part of the “Sewing team”. I was working part-time for about a year in the beginning because I wanted to draw in private, but I’m too busy to draw.

Tamaki
You’re a very talented staff member, so you are always busy.

——But you didn’t dislike it, right?

Motooka
I didn’t expect that. (laugh)

Tamaki
It’s different from what you planned. Did you think about what you were going to do? (laugh)

——Was there some frustration?

——What kind of pictures do you draw? Oil painting?

Tamaki
You also draw a print shawl, so you can reduce some stress there, right? (laugh)

Tamaki
I’m leaving every “exhibit” to you, the website, promotions and the online shop, too.

Motooka
I don’t think I have done that well at all.

——When were you put in charge?

Motooka
While I was doing print shawls and cutting denim while sewing …that kind of job has increased little by little, and from around the 2nd-anniversary event “Futatsu-kai”, I was put in charge of leaflets or visual production… I couldn’t be in sewing any more.

Sakai
The interesting thing is that Kubo-kun was originally freelance.

Tamaki
So he was a lone wolf.

——What about the time limit …?

——I thought you would say that. (laugh) Well, is anyone not here today?

——Thank you again for your cooperation. You three are in charge of many roles…

Ohama
Yes, we do.

Kubo
I feel they are mixed. I …well, I shoot and register items. Mainly, Ms Motooka is in charge of the tamaki niime’s promotional products at the main shop here and also designs and creates pillars such as the online shop site that has begun the other day. I mainly design and develop data used for things that are needed for such as department stores and events.

Ohama
Basically, I’m building a system. On the front side of the web, Ms Motooka is the leading player. I’m handling our online shop, a B to B mechanism with corporate customers, and new internal functions. I’m a front person who deals with them as a new contact.

Ohama
Additionally, I manage the only one items in the warehouse. It’s also my responsibility for dealing with any problems that may come up with. The clerical part of shipping when the orders are placed at the online shop. It’s part of what I do.

——By the way, what kind of job does Kuninori Hashimoto do?

Kubo
He has a wide range of responsibility.

——Seriously, each of you has a variety of roles.

Kubo
He had been making clothes since he was a student, so he can draw patterns, design and sew. After that, his aim was to be a painter. He also managed EC sites in his previous job. So he’s also good at inventory management and photography. He also draws visual drawings for the 2019 autumn and winter collection. And he also registers new works.

——The “Wa team” is a group of people with diverse abilities, correct?

Kubo
We have different backgrounds.

——Isn’t everyone something different? Ms Motooka was originally from the University of the Arts, right?

Kubo
I’m from a vocational school for interior design.

Ohama
I have a bachelors in business management.

——And Mr Hashimoto was studying fashion. It’s a great variety, isn’t it? When was the actual start of the “Wa team”?

Ohama
When was the actual start?

——I see. I roughly understand the history of the “Wa team”.

Motooka
The “Web team” was renamed as the “Visual team” in a few months.

——I do remember the “Visual team”. Aren’t they kind of the same?

Motooka
Yes. Only the name has changed. And it became the “Wa（わ） team” around in March.

——Actually, they were same, and we thought the hiragana was better. We are working in the shop counter and…

Motooka
We also have a place where we shoot each piece one by one. So we have two locations.

Motooka
As I said, there are a wide range of duties, so there are endless things to do.

Motooka
Yeah. So… Only four of us somehow manage to take care of everything.

——Oh, I see… Not just for sales promotion.

Kubo
There are sale promotion aspects, but there are many other things too.

——What was the origin of the name of the “Wa team”? Is it the centre of each team?

Motooka
By creating such a team, there is a connection with the outside (the company), and there is also a connection between the (inside) groups, so we name/call it “Wa (わ)”.

——Does it connect them? Firmly.

Motooka
I think it does.

Ohama
We are trying to connect them.

——When you, Mr Ohama first joined the company, I heard that you established the “root of tamaki niime,” which is the corporate philosophy and management guidelines of the tamaki niime brand. “Enjoy creation and continue to search for something earth-friendly.” That was a proposal from Mr Ohama, right?

——I had an impression that an interesting person came in. It was a proposal of words that would be the basis of all the staff, such as vector alignment of the efforts of various things as a brand and unification of consciousness. Right?

Ohama
That’s right. Of course, I made a suggestion that it would be better to verbalize the ideas that came out from Tamaki and Sakai when we were talking.

——I also thought that it was appropriate that verbalization was necessary. It can be shared by making it into a language.

Ohama
At that time, I wanted to understand the organization of tamaki niime, Tamaki and Sakai. I tried to make it into a language, which was the very first thing I did.

Ohama
I suggested that we could connect it to other people around us if we could put it into words. So, I’m glad that things started taking shape. And now we should try to let everyone know it. I mean, there is still a lot of work left to do in getting people to understand.

Ohama
I think that the fact that I was so particular about verbalization (that it) gave them a strong sense of just learning words.

Ohama
Yes, that’s why there were probably some people who rejected the idea, and I couldn’t picture the next step by myself. Because of that, the “Wa team” was made, and we’ve stepped up to create a form in which everyone’s ideas are based on one policy. That’s how I feel now.

——A word like “Compass” that can be a guide for everyone’s action by raising it and can also correct the trajectory. From that time onwards, I think that tamaki niime was becoming more organized. I also have the impression that from that point on, we are not limited to creating, but are also active in PR and promoting sales..

Motooka
But I think … it’s still not “basically” good enough.

Motooka
Ummm, I’m making things that are in need, such as brochures, the web, and recently the online shop. It lacks coherence. We have to create something that can be expressed from a more “root” (point). Right now, it’s still superficial. I feel we’ve ended up in such a place, but I hope we can do a better job that will straighten the depths.

——To design or visualize the core a bit more?

Kubo
Well, Mr Ohama and Ms Motooka talked about the “root”. Since our company changes a lot, the part around the “root” often changes. We also talked about the verbalization earlier, but I think it’s quite challenging to verbalize our company, including logic and rationality. Personally, I don’t think we can narrow it so easily with them, thus defining it becomes a lot of work.

Kubo
To put it all together, if we set this up, there will be some other things that we would like to say next, no, we can’t explain this enough. If we can parallelize them, we would say that the core brought up by the concept and in language. It would be possible to visualize what we grasped as Ms Motooka says. But it might be difficult.

Kubo
I feel that our thought itself is outside the logic.

——Of course, there are parts that you can’t say logically, and if you try to make it into a language, it may not fit. Maybe Ms Tamaki and Mr Sakai want some of that. (laugh)

Motooka
Yes, they do. (laugh)

Kubo
Because they are playing. (laugh)

——If you want to explain, go for it! That’s something they are thinking.

Kubo
So, can you catch it? Something like that.

——You cannot find anything exciting like that. It would be worthwhile if you were the one who has to explain, but it would be difficult … It seems that you are struggling every day with it.

Motooka
We must accept that it is changing, and because it’s interesting, we’d like to shape it each time. But since there are still parts that do not change, it is like a fundamental idea there, isn’t it?

Motooka
We hope we can adequately support that. On that, we will do this next, and it will be this kind of development. Even if the directions seem different, the original thought is the same, (so) we would like to explain a little better.

——For Ms Motooka, including all of you, might think similarly. Now you are just dealing with each decision each time, but you prefer to be more responsible and firmer from the deep end.

Motooka
From the outside, people can only see the part cross-sectionally here and now, but if they can’t see the whole thing with directions, they might get confused.

——Oh … that’s very difficult. You should design and deliver messages while considering the danger of being distorted. You may have to be careful, but if you’re too careful, you lose the momentum. I think you’ve been listening to Ms Tamaki and Mr Sakai’s thoughts every day, but how to get people to understand the core message.

Motooka
It’s more like a whole idea, rather than a language, so Ms Tamaki doesn’t even say everything in words.

——Well, there are times when she’s gesturing. Indeed.

Motooka
Unless we understand what she (Ms Tamaki)’s saying about this much, including the intentions of the surrounding wills, we are not sure I’m going in the right direction. What? It’s like going in a different direction.

——Even when I interviewed in the “niime encyclopedia”, there is such a moment. It’s difficult, isn’t it? It’s like a struggling “Wa team”. (laugh) 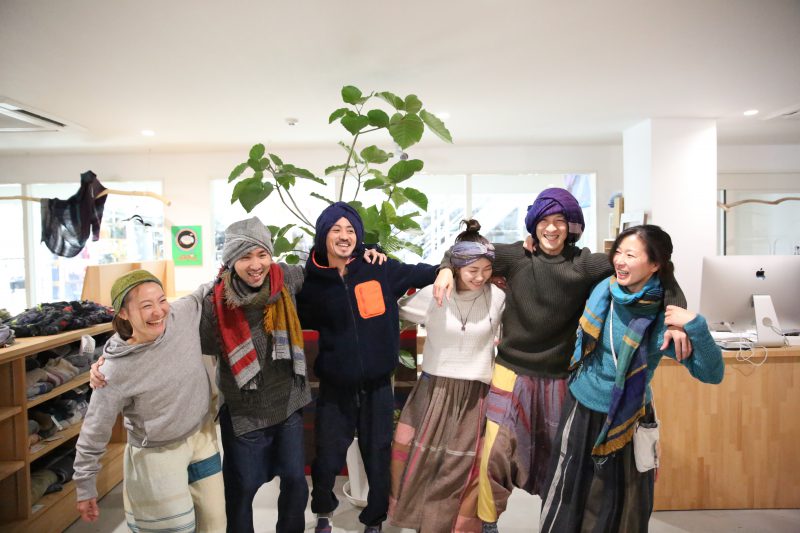