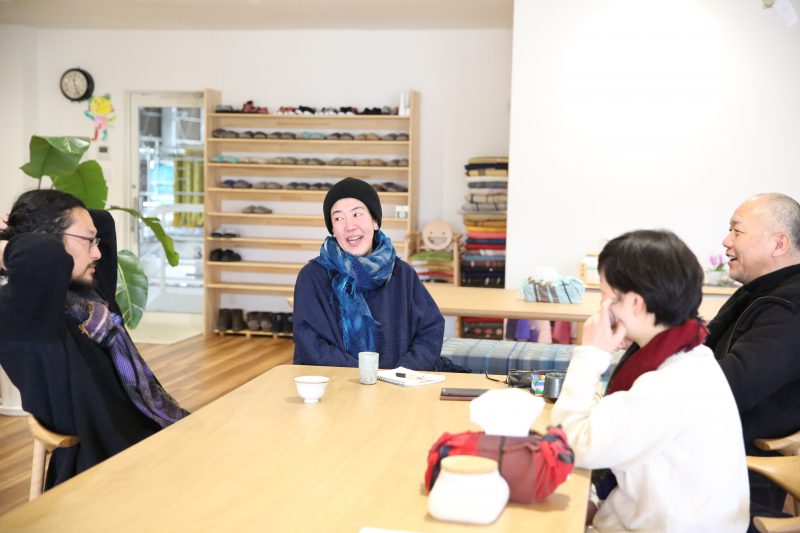 Watabe
For example, if we simply pick 4 colours out of 500 during the weaving process, shouldn’t we see how many combinations are out there?

Matsumoto
(to Watabe) Please calculate it.

Watabe
There are 61.7 billion ways in a 4 colour combination.

Watabe
We have some items which are partially dyed after being woven with 4 colours.

——You dye, weave, and dye again. Wow! Whose idea is that?


(Watabe looks at Iwamoto) ——She is being humble.

Iwamoto
We cannot make the “Only one” item if we don’t try something.

——Aiming at making the “Only one” motivates you to challenge yourself, right?

Iwamoto
I think we always try something to make the “Only one” item.

——As you previously said, you also go to see other places or read books.

Iwamoto
Those are the ones that already existed in the world. I always think how to create works in “tamaki niime” way by applying those ideas .

——I see. That’s the point. There is no limitation, but it doesn’t mean anything is ok. What do you think, Takako (Ms Matsumoto)?

Matsumoto
It is hard. When I simply come up with the ideas I want to do, if they don’t match with “tamaki niime“‘s products, it is hard to get it through. I just hear opinions from other staff and find a way.

——So, when deciding if your ideas are ok or not, would Mr Tamaki call you out?

Watabe
Our “Dye team” wouldn’t be called out much.

——Does she leave the “Dye team” alone?

Watabe
We have the “Chefs” after we dye.

Watabe
Even if we throw a ball which is hard to catch, yet as long as someone catches it, any ball may be ok.

Iwamoto
That’s so irresponsible, isn’t it?

(Everyone laughs out loud)

Watabe
I throw the hardball and someone catches it. As a result, we can create something interesting, right?

Iwamoto
You are right.

Watabe
When you only pick the easy throws, you have no variations.

Watabe
In a good sense, that’s why we don’t think about catchers. We throw any balls we want to throw.

Iwamoto
Throwers are the winners.

Iwamoto
It seems like we “Dye team” make the materials before the products. It is like “we made exciting materials for you, for the next line, so go ahead to use them as you like.”

——You pass the baton! And one more thing, there is a phrase you all shouted together at “tamaki niime’s daily life” on YouTube.

Iwamoto
Oh, I think we did.

Watabe
……That is the “Calculated coincidence”!

Watabe
No, not at all.

——Wow, how did all three of you come out to say it all together?

Watabe
No one did.

Iwamoto
He is being humble.

——That’s good. You perform on the spot.

Iwamoto
You speak while you are thinking.

Watabe
I can’t think if I don’t speak out loud.

——You can be ready to switch on by saying “Set to go”.

Watabe
When I try to decide the colours for the next day, I often couldn’t decide. It is just right to think about it on the way to work while riding a bicycle.

——Right before the presentation.

Iwamoto
I may be doing something like that, too.

——You don’t get the ideas long after studying or thinking, right?

Watabe
No. I have never done that. How about you?

Iwamoto
I don’t either. When it is required, we have to do it.

——So you depend on your inspirations in the morning.

Iwamoto
We have the data from yesterday and also from the day before yesterday that gives us a hint which colour may work well.

Iwamoto
About colours. Basically, we make mixed dyes, mixing primary colours of yellow, red and blue. We could guess the colours from the mixed dyes of the previous day and the day before yesterday.

Iwamoto
The date could give us a clue for a specific colour, so let’s go for it!

——“Calculated coincidence”. What an exciting phrase!

Iwamoto
We make dyes mostly upon estimating colours, but we depend on 20% unknown coincidence colouring. Interesting creations can be produced by only coincidence. We also get coincident colours through hand manipulations, such as wrapping threads which may create interesting colour designs.

Watabe
We leave non-work part so that things may happen from sheer coincidence.

Iwamoto
Just play! You would get something!

Watabe
Just play! You would get something!

——You would get something beneficial out of “play”?

——It sounds like you are forced to say it. (laugh) But I think it is true.

Watabe
Basically, I like to play. Philosophically, it just means “Let’s have fun!”

Watabe
We don’t accept hard or severe things to be beautiful.

Iwamoto
No, we don’t.

Watabe
There is no beauty there. We talked a lot about it at the last drink party.

——Will you explain to me in more detail?

Watabe
How do we make works more easily?

Iwamoto
Yeah. I am basically lazy. So I need to work easily, how to make time and how to use time.

Watabe
I enjoy myself even when I’m in a hurry, just like pretending to play a game.

Iwamoto
We must have looked very messy from other section staff.

Watabe
But, in our individual time, we are very separate.

Watabe
No, at work.

——Do you work individually?

Iwamoto
We all belong to the same “Dye team”, but Watabe does English translation, Takako does weaving, and I make “Mokemoke”.

Watabe
The hand knitting. Iwa-chan (Ms Iwamoto) has been making the round rugs. We cannot make them by machines.

Iwamoto
You can only knit them by hand.

Watabe
Many people wouldn’t know they are hand-made.

Iwamoto
No. they probably wouldn’t know because they cannot see stitches.

Watabe
We should put down “Hand-Made” on the labels. At least we should let our customers know this is not made out of leftovers.

——I think they are art products.

Watabe
We should display them with “Sokoshiki” and make a special section for hand knittings and weavings.

Matsumoto
They are hand weaving coasters.

Watabe
They are the ones Takako has been making.

Watabe
She has the ambition to make them bigger.

Matsumoto
Yeah, I want to make a big rug mat.

Watabe
Should we advertise to find people who could buy it?

——After this, they kept talking about how they make the developed style of “Sokoshiki”, Matsumoto’s large rug mat sell.

Iwamoto
We “Dye team” evolve ourselves during such conversations.

Watabe
We talk about sales a lot.

Iwamoto
After talking about sales, we are reminded that we are the “Dye team” after all. (laugh)

Watabe
If we don’t have to dye, we would go out to sell.

——You have limited time to use the machines, however your work is not limited to “Dye”. You have so many ideas beyond that.

——So you think about a whole picture all the way up to sales.

Watabe
We have the original dyed items projected in the “Dye Inventive Series“ by our “Dye team”. They are amazing.

——From your comments, I have my impression that you are very artistic. I understand your focus on the products to end up on the market, but you enjoy letting your feelings flow while you create.

Iwamoto
I love art. Those feelings guide me to create. This company allows me to approach the whole process, which other companies wouldn’t allow.

——Then, finally, I would like to ask your wishes and desires for the future.

Watabe
Gan-chan (Ms Iwamoto) will dye, I mean, conclude speaking about it.

——Shall I ask Takako, first?

Matsumoto
My goal is making that big rug mat which we were talking about. I hope to mix the natural dyes which we may get in March.

Watabe
The natural dyes would make it interesting for the goods, but not for clothes.

Matsumoto
I thought so, too. I am worried about the colour-changing or losing them for clothes. I want more advise.

——Mr Watabe, how about you?

Watabe
My goal is “Sukumo”.

Watabe
Don’t you understand? We use the Indigo which are grown in the Hie district in Nishiwaki.

Iwamoto
You are great!

——You start with growing Indigo.

Watabe
Our company has already started growing indigo for testing starting last year. I would work for harvest, make “Sukumo” and have Ganchan (Ms Iwamoto) cook it.

——Then, Ms Iwamoto, would you conclude with your goal for the “Dye team”?

——You want to play somehow, right?

Iwamoto
I feel better if I would use the word “play”. (laugh)

Watabe
I feel burdened if I say “I must do it”.

Iwamoto
On the contrary, “play” would be the glue for our motivations.

Watabe
You could say you must play. (laugh)

Iwamoto
We could have the best time that we create and make products while playing.

Watabe
We should have fun. 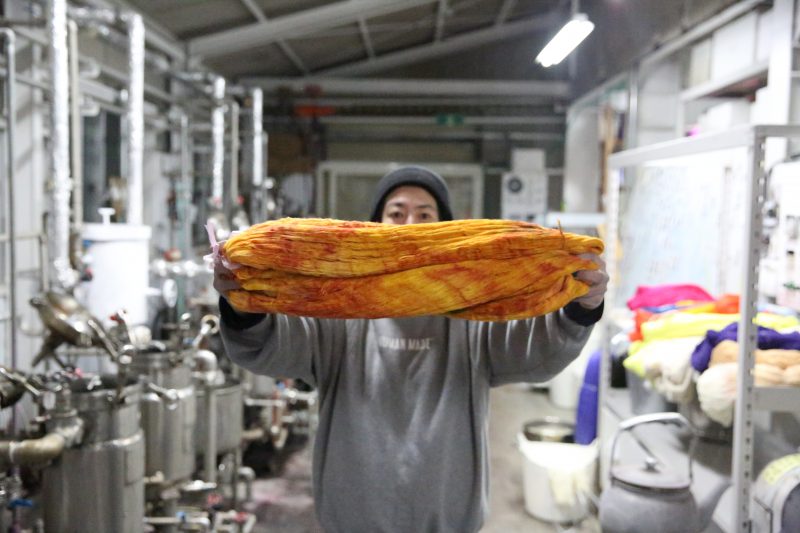