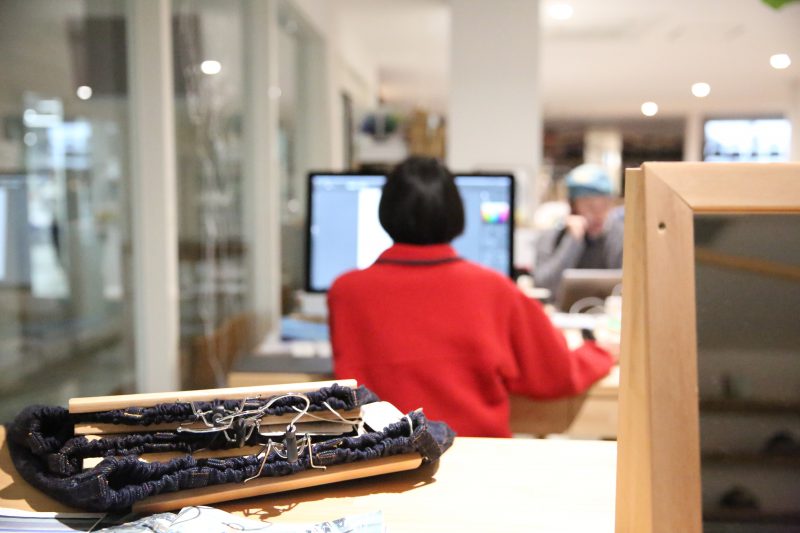 Motooka
I personally find it fun to communicate through designing the products at the site of creation. Since we handle all of the processes, I could know everything and built good relationships within the company. Moreover, I think it’s fun to be able to convey it with my own hands.

—— It’s really great to be able to communicate with everyone directly, right?

Motooka
Additionally, we are not only making clothes but also working on multiple project s. There are multiple possibilities.

—— Actually, Ms Motooka, you were also in the sewing team, so you probably understand the feeling of being at the origins. How about you, Mr Kubo?

Kubo
There are a lot of projects being worked on at the same time, and the priorities change all at once; however, the flexibility of production is quite high, so it’s fun to be able to make a wide range of proposals for ideas to take with. For example, if I created an event DM idea as Plan A, Plan B, and Plan C, the other staff can see it even if plans go in entirely different directions, there is a possibility to narrow it down from there.

—— The tolerance of that area is quite high …

Kubo
That’s right. While doing so, as Ms Motooka said, in order to find out if this has such nuance, I first submit a different idea. I’m sometimes surprised to know that the stunning design was chosen. (laugh)

Kubo
There are things like that … so it’s fascinating.

—— Is that the best part of your job?

Kubo
Yeah, how the boss and Mr Sakai react is also enjoyable. What I thought it was great turned out to be nothing. Something like that…

Kubo
I usually ask them to do the final check, but when it comes to creating other promotional items variations, I feel free to change them through every possible means.

—— Once they have decided on the direction to take, you are free to do the rest?

—— It’s all up to you. You have such a high degree of freedom, right? How about you, Mr Ohama?

Ohama
Yeah. The things that I enjoy most here is … actually, it includes a bit of tension. Before I came here, I’ve been crossing several companies: different industries and companies with different sizes. It depends on the case with the company. In my experience, especially in the system, it is rare to let an ordinary employee be in charge of such a wide range of job or role. Though they (Ms Tamaki and Mr Sakai) do not hesitate to allow, me to handle it. For example, in the case of this company’s system, we have to think about the part related to finances. In the case of an average company, some people at headquarters take care of it. It is almost finished, but there are a lot of things to improve upon within the foundation. As we talked about the “root”, to promote the existing, how should we handle the basics? As for myself, I get to experience the kind of things that come from there, so I think that is also fun. The first thing I said was about “tension”, on the other hand, is that if the foundation is shaken or wrong, the influence will be significant.

—— I see. I get the feeling that you are really trusted.

Ohama
It’s not “tension” in a bad sense, but in a positive sense.

—— How does your work as the “Wa team” connect to what goes on outside the company, the shop and lab in regards to the origins?

Motooka
The sales staff sell the products we create, but if you just sell them, people who do not know us will not notice us, so provide information to places outside the company. I think that it means that it is connected in the sense that it will flow outwards but also flows within the company. Simply put, I shoot the finished products and register the QR code with the information that includes the colour and details of the only-one creation. By doing so, we can tell when and where the product was or wasn’t sold. You can use that when you can view things, know inventory information, and then make plans for what kind of item and with what colour will make next. There is a part that can connect both the inner and outer parts.

—— Is the QR code like a profile for each work?

—— I see. As a result, the reaction of customers will be collected. I understood. Finally, please tell me about the future outlook of each of the “Wa team” members.

Motooka
As I said, I hope to express the basics as my job. And about “connecting”; currently we create our works for SS (Spring and Summer) or AW (Autumn and Winter) however, each one of us should have an image for each term to create.

Motooka
That’s right. I hope that I can express it in a unified manner.

Motooka
So it’s easy for both creators and sellers. If there is one visual idea at the time of sale, it will be easier for customers to understand that they are doing something like this.

—— Something we can use for outsiders … I see. That’s what you are trying for half-year period.

Motooka
I’ve been doing this all this season till now. Then about a year ago, we started to decide themes and make clothes. We are still struggling to create and sell them along a fixed theme…I’ve created it, but I think if I help out with sales too, it will go well, I cannot explain the idea well, so everyone’s image is not unified, and there is no tool for that.

Motooka
Whether it’s actually created or not, I don’t really have a thing that can explain both inside and outside, for example, a brochure or something.

Motooka
That’s right. We are trying now, but we have to do it properly.

Ohama
I’ll also continue talking about the “roots”. I think that this is necessary both internally and externally. We’ve been creating something needed at the moment or to be adapted. Positively speaking, we are in progress; however, the other side of the coin is we seem like we don’t have consistency. I’m a little worried about that.

Ohama
We have various mechanisms and systems, but …

Ohama
Yeah, it’s been added and added, but it feels like its patchwork …

Ohama
That’s right. Well… it’s okay while it is not big, but as the business and organization grow something new may come up. We have to fix it, and the freedom to change gradually becomes less effective and becomes impossible.

Ohama
That’s right, so I think that our brand tamaki niime, that is doing various things, is probably the strongest when we find the optimal point for that mechanism.

Ohama
I want to think about what it is like in this extension, and I want to steadily shape it.

Ohama
Internally, the basics of a management system were already created before I joined the company. So whether it’s a corporate transaction B to B (Business to Business) or an online shop B to C (Business to Consumer), or even the management of personal information that is connected, it should not be something that only some staff can use. Since there are staff with various backgrounds, I have to make one that everyone can use reasonably well even if there is a difference in knowledge and experience. I think that it will lead to customer satisfaction. Even when I look outside, I believe that the root is the same, not only in design but also the mechanism of the online shop. Also, the system used by our business partners should be the same way. It seems that it will be an e-mail magazine, LINE will be used in the future…we are now gradually using various things…3 or 4 SNS. I think there is an optimal answer for what kind of form, content, and frequency there is in order to reach out properly without reaching out to “distorted” things. In order to do so, I think that it may be necessary to create an application. Also, we have a “niime-village” concept, so it is better to create it as a website. As a way of connecting with customers, I want to communicate with people other than just shoppers.

—— I think you can think of all the possibilities.

Ohama
I’m saying the extreme thing, but what is the optimum point? Through the process of creating a system, I would like to think about it as a future outlook.

—— I think that you are focusing on “optimization” in terms of presentation. What about you, Mr Kubo? As a perspective.

Kubo
I have been in the company for a little less than a year now. Even with the start of creating the theme, the AW in 2019 and SS in 2020 wasn’t directly reflected in advertisements. But it seems to happen from this season’s AW, so I want to be able to properly integrate the part that is universal and unchanged and the image every half year. I’ve been dealing with the videos recently, so I’d like to expand it a little further and express it with a time axis. Since the image has something like a “missile tool”, even for people who do not know tamaki niime yet, I wish I could deliver it or create something for them.

—— You have a desire to develop within a specific period, rather than an ad hoc approach, right?

Kubo
That’s right. I hope that tamaki niime never changes when it is cut into pieces. Even if it is a short scale, I wish I could create a part of tamaki niime.

—— By the way, what was established as the theme of SS and AW?

Motooka
Currently, the SS has just started. The theme is “earth”, and the coming AW’s one is “Fire.”

Motooka
Even if you say “fire” in one word, the image is vast, and there are possibilities that some people have a warm impression, and some have strong feelings. I’m trying to consolidate that and solidify the image.

—— Did the keyword come out at the meeting?

Motooka
About a year ago, W started to decide a semi-annual theme, and at that time the topic of the five elements came out, and then we finally settled down to the point where we could take the idea. The last year’s AW was with “wind”. Since each one has a wide range of images, we are now narrowing down the image of the theme of “fire.” It has the feeling like people gather around the “fire”, for example, at a camp or in the open air. I try to come up with an image of “warm” and “get together” from “fire” and go in that direction.

Motooka
We’re still exploring to create an image according to the theme, and we have to do our best this time to see if it will work in that direction.

—— Listening to the story, what is familiar to everyone in the “Wa team” is how to optimize and transmit tamaki niime into the fundamentals. Thank you very much for today.

Motooka
Is this okay? Are you sure?

—— I think I should go with a serious mood.

The staff of the “Wa-team”, who works with PCs every day, is the exact opposite of the “Dye team”, and has a quiet and relaxed mood. This breadth may also be part of tamaki niime.
While digging deeper into the “root” of tamaki niime, they set up a system, set the theme, and deal with the delivery. It was time for me to get a glimpse of their inner world and secret feelings, which play a different role in the company rather than the creation of the work. 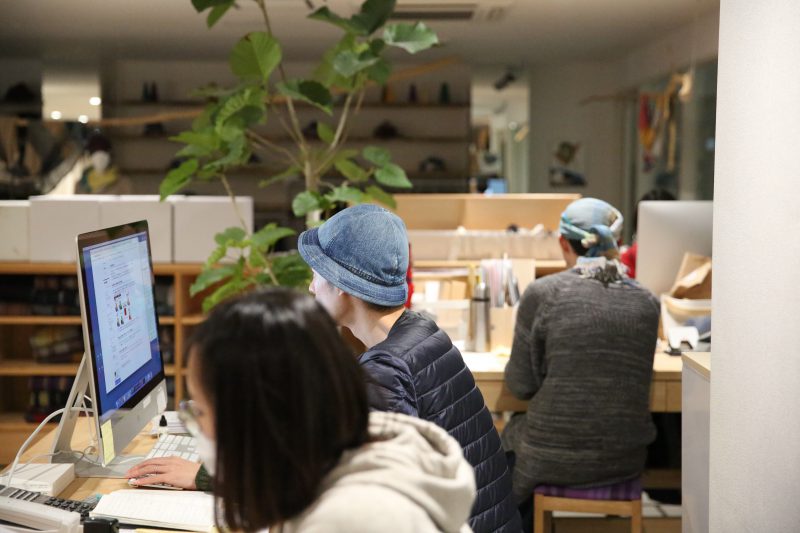