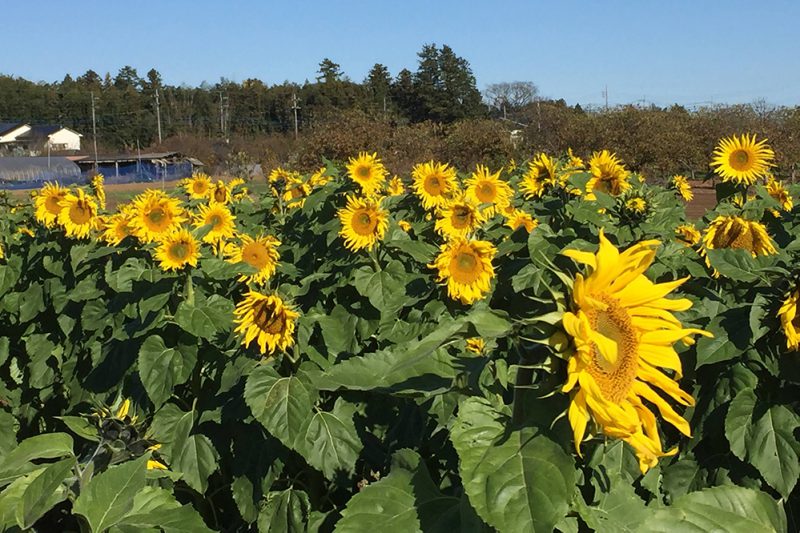 Here, in Ibaraki prefecture, one farmer plants sunflowers to improve the soil condition.
I am in the mode of thinking about Japanese food security and our way of life.
Even if we could solve a certain social problem, it would cause new problems. What can we do for the future in such a complicated modern age?
I am feeling empty with the warm warm weather and full of unseasonable sunflowers which represent climate change clearly.

It has been a week since I came to Ibaraki.

What I learned is that
Ibaraki is perfect for agriculture with fertile soil and a nice climate in Kanto Plain.
What I got from the farmer’s circumstances is that
the Japanese economy stands with food waste. I’m sure this is the same in all countries which have food loss.

Ibaraki is located at the last northernmost part of where we can harvest the south’s food and also the southernmost where we can harvest the north’s food. It seems that no food will be one speciality food because any food can be harvested. For example, even though Ibaraki has the highest yield of melon in Japan, Hokkaido is the most famous place of melon.
( Actually, if we eat melon buffet, they are made in Ibaraki, I was taught.)
When I went to a local farmers market, there were so many kinds of radish, broccoli and mushrooms, also there are many things that I cannot buy at my local area, such as konjac yam, wild rice, lotus root, Japanese yams. It was funny that there were green bananas there which I had eaten every day in Tonga.

My friend’s family, an owner of a farmer’s company, makes radish and potato for processed food. During the sweet potato shochu made in the Kyushu boom period, they shipped out the sweet potato for shochu. Even Kyushu shochu was made from sweet potato produced by Ibararaki, the name of Ibaraki never appears. However, the owner thinks that that is good. This is because, as long as there is an image of “shochu is Kyushu”, the shipping volume will reach more with the label of Kyushu than the label of Ibaraki finally . She wants to be a backseat player rather than struggling to differentiate brands.
“ It is more important that supporting players whose role complement stages are solid than everyone being a top player. That is the point of enriching the food section in Japan.”
She said confidently and looked very cool. That is also the problem of the food labelling rules, however, I thought we should know that our food, especially processed products (convenience store salads, vacuum-packed side dishes, pickles, etc.) are supplied by some lesser-known areas such as Ibaraki.

Anyway, what is shocking fact is that we would not be able to solve the food waste problem.
Why ?
Because our economy in the food section now is available with throwing a lot of food away.
That is how our economy is going.

Under the situation of COVIT-19, the primary industries which are said that they will not be unharmed by Corona shock are getting worse due to the downturn of the foodservice industry, ceremonial occasion or convenient stores.
I cannot find a good solution to sell their products. No, I don’t have an answer. As I have always thought how we can solve the food waste problem, I don’t know how we can encourage the farmers for now.

More and more people make and eat at home and they don’t throw food away.

The products that were harvested and manufactured in consideration of the loss amount up to now cannot be sold.

That is the reality that is happening now.

For an ethical reason, while the movement to eliminate food loss is becoming more and more active, the problem might not disappear forever because if we did, we would have new problems such as ‘ economic growth will decrease”, ”unemployment rate will increase”.

A new social movement has not happened yet, saying ‘ Why don’t you decrease the amount and increase the quality without pesticides ?’ or “Let’s live slowly with less income.
Everyone believes that we can grow crops forever, but the reality may be hard. It is said that in the next 60years soil will not be available to make food to eat and clothes or houses to protect ourselves. This means we use too much soil. We, human beings, already have used up one-third soil that has been accumulated since the birth of the earth in the past 100 years. Moreover, we are using the remaining two-thirds of it in the next 60 years. Because we don’t know about it, do we continue to use it? Because someone doesn’t want to tell it, they don’t let it know??

I’m sure this is not only the food waste problem but also “world hunger and malnutrition”.
Why does it never go away even if so many people work on problems worldwide for many decades?
I had doubted the way but there seems to be some other reasons that some don’t want to solve it. “Fact-fullness” announced that the whole world is getting better but still there are problems. Unfortunately, we are getting new problems from that improvement.

The representative example is environmental issues.

When the owner started planting sunflowers for soil improvement instead of using chemicals 30years ago, they died with frost in November.
It has been gradually warm year by year and this year the sunflowers are in full bloom today, too ! in December.

In this distorted world, it is said that if we will not be able to stop the increase another 2°C and after that it will be raised up to 10°C, 20°C which we cannot live any more.
If these distortions will adjust a bit with the life change against COVIT-19, is it possible to avoid our survival crisis?