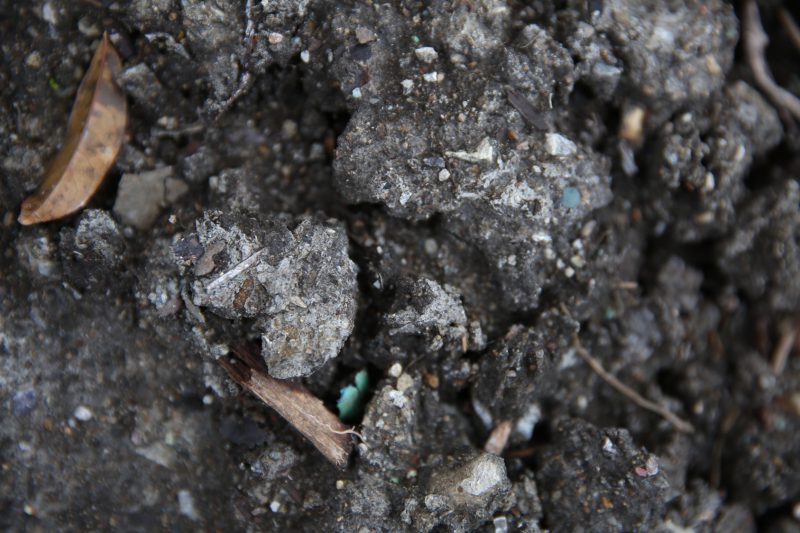 Ms Tamaki first said, “you know ‘Bengala-Zome (Bengala Dyeing)’, right?” and she started speaking about her new challenge in the tamaki niime style.

“Bengala” is an organic component (iron oxide) that can be obtained from the soil and is also called Bengala(紅殻) or Bengala(弁柄). A red pigment is a natural sourced dye that has been traditionally used in daily life in Japan for a long time. It is said that this name was given because it was imported from the Bengal region of India during the Edo period. As one of its benefits, it is non-toxic and safe for the human body.

Tamaki
Bengala itself was initially being used for painting wood red to prevent the shrines and houses from decaying, and Habikino City, Osaka, is the paint producer. However, it is no longer necessary to build so many wooden temples and shrines as before. Also, red iron oxide has generally not been used to prevent the wood from rotting for some time, so the production area is about to collapse. The people in the Bengala dye production are now thinking about how to survive. Since it is a pigment, it was used initially only for painting wood and vessels, but they came up with an idea of using it for textiles. To make this possible, they changed the pigments and tried various things. Then, they developed dyes for cloth using their technology. They completed creating a pigment for textiles and have been selling it. They have been doing promotional workshops that demonstrate their works by dyeing fabrics using their pigments. We had already been introduced to them and previously had a chance to meet face to face. However, we thought mass production would be difficult and costly with natural resources at that time.

—— Last year in Okayama, you had a positive experience with natural plant dyeing.

Tamaki
Yes, indeed. So after all, because Bengala is made of mud, we started discussing that we should try mud dyeing at our “Earth Regeneration Lecture”, you know? So, Bengala was one of the inspirations to try to visit there and visit Habikino and ask them about it. It seemed that the area had been a production area for a long time, and there were many Bengala pigment shops, but now I was told that they don’t exist anymore.

—— Was that the last pigment shop?

Tamaki
It seems so. They have a son, though. They said no one was doing business in that industry anymore; we were the last. So, I asked them why they were inspired to paint the pigment on the textiles, and then they said they thought the technique was fascinating. They said that there were pink, yellow, and other pigment, and they were all created by blending natural resources independently. They had, of course, researched the consistencies and collected the data. Still, mostly they were blending pigments based on feelings, heating and cooling the pigments and blending by hand, the old-school way; that was why they told us they could not do mass production.

—— This must be fascinating, and they must be continuing because of their curiosity about Bengala instead of thinking of the profitability.

Tamaki
In kimono culture, the plant-dyeing era is over, and in the last 100 years or so, textiles started to dye using mass production utilizing chemical pigments, right? Hand-weaving was discontinued in a flash. It is said that while hand weaving was still famous, there was still a culture of dyeing “Happi” coats and Noren curtains (Japanese curtains) with plant dyes. Still, when the industrial products came, the (hand-weaving) technique was ignored because it was useless. Some Indigo dyeing may have remained. Such as Banshu-ori, chemical dyes were used to dye efficiently and beautifully, so the technology evolved at once, but in such a flow, Bengala became overshadowed since large quantities became too difficult. They said that there are few industrial products dyed with Bengala because they have been cut off. Except for what they are working on.

Tamaki
Why didn’t it become prevalent? It was because those pigments can’t be mass-produced, which meant that it was unable to lower the production cost. However, dyeing textiles with natural pigments is easier than doing it with chemical dyes. It doesn’t require heat. It just needs to be mixed in water. Dip and squeeze. That’s it. I was wondering why this wasn’t introduced to the weaving industry. As I heard the story from them, I felt how revolutionary it was. But, just because they can’t be mass-produced, they were not considered as dyeing solutions. Even if it is so simple to dye them. Therefore, I think they did not have a chance, but they must be natural ones that we have been looking for, easier to dye with, enable us to dye uniquely, and have high fastness to sunlight. So, I was like, “Oh man; this is amazing stuff right here. I wish I could have met you earlier, sweetie.”

—— It seems that if demand rises, there is a possibility that the number of producers will increase and the production area will be revived.

Tamaki
That’s why pigments are gradually reviving in public perception, and wholesale towards overseas has started. It’s good that the number of transactions has been increasing.

—— That’s how the trend began.

Tamaki
I think it is interesting. What to say, you know that we must have more undiscovered suitable technologies out there. People only focus on chemical dyes, but once I notice that natural pigments are cool, my world expands.

—— Then, you have become an insomniac again.

Tamaki
I felt, “I am insanely excited!” Clothes become stiff when dyed with the pigments, so I haven’t done it even though I knew the pigments existed. That was why I thought it was not what I expected for the material I used and didn’t consider using it, but I found out that it didn’t have many differences when dyeing with pigments at the thread stage. It didn’t have that stiff and harsh feeling but came out more like matte touch, which was my type.

Tamaki
Please look forward to it. I bought Bengala to try dyeing it at my place.

—— With that, if you examine every manufacturing process with the earth in mind, you will naturally come across valuable technologies. Then, that will give you chances for new possibilities.

Tamaki
That’s right. Therefore, they collect mud from the land they visit and turn it into pigments for dyeing at their open workshop.

Tamaki
We are discussing having them do the open workshop at our place. I believe that it will be a tool to connect the earth with what we wear. I thought, “that will be interesting!” They told us that we could collect the mud in our area, and I thought, “a-ha!”. Then, we came up with the idea to promote Bengala as well.

—— Would you mean that the colour of the soil varies depending on the land?

Tamaki
Yes, they vary. Talking about Japanese soils, they are either black or grey because there are many rice fields, as they said. By comparison, the soil in Australia is bright red because it contains a lot of iron. So, I noticed that it is all about the soil. That realization led to our current efforts to “Earth Regeneration.” From the perspective of soil and mud.

—— The colour of the soil slightly varies here and there. If then, there must be endless colours.

Tamaki
Yes, indeed. That is why it is interesting, isn’t it?

—— That’s interesting with no questions asked.

Tamaki
It is like, “gotta dig here, gotta dig there!” Then, they said, “let’s do it with the mud here. Send it to me; I will make pigments.”

Tamaki
Isn’t it fun, is it, right?

Tamaki
As the word says, it’s infinite. It is like, “how about the soil here?”

—— That is like, “*dig here woof woof.” (laugh) (*From a Japanese folk tale, “Hanasaka Jiisan – The Old Man Who Made the Dead Trees Blossom”)

—— In a breath, it has become a treasure hunting story.

Tamaki
After all, those simple things will make people feel attached to the land around us.

Tamaki
I believe that the concepts of “Earth Regeneration” and “Dyeing” will form a tight bond, like glue.

—— It has become a grand story.

Tamaki
I had never expected we would link these ideas in this way, so I was surprised. By encountering the world of pigments, the expanded possibilities laid in front of us. There is a lot to do.

—— And, the colour scheme is Ms Tamaki’s specialty.

Tamaki
What’s interesting about Bengala is the existence of a shade of white which does not exist in the dyes industry. But, the shade of white exists in the pigments industry, and the fact enables us to layer white on black. Things that were impossible become possible, and more possibilities are awaiting discovery. All in all, I should probably become a “pigments artist” rather than a “weaving artist”. (laugh) I can keep dyeing threads quietly, on and on.

—— It may be possible to inherit the technique of Bengala dyeing here.

Tamaki
Yes, it may. Even the Bengala producers were showing interest in us. They only produce and sell primarily toward individuals. Still, if it is possible to create a certain amount of them, it would be nice to collaborate creatively and do something interesting. They told us to give more suggestions to them. Bengala dyeing had not been suitable for the mass production era before, but we are in a different stage now.

Traditional techniques and materials that are likely to become obsolete have the particular promised value that has been used throughout the ages and well-polished by human hands and eyes even with the low production efficiencies.

I think the creation of tamaki niime, which does not go for uniform mass production but appreciates the individual uniqueness of colour and the faces of each design, seems to have a good fit with valuable technologies and materials.

Over time, tamaki niime creation evolves and goes deeper with a new meeting to Bengala. Ms Tamaki Niime’s infinite endeavour to search and adventure towards exciting-full creation will continue. 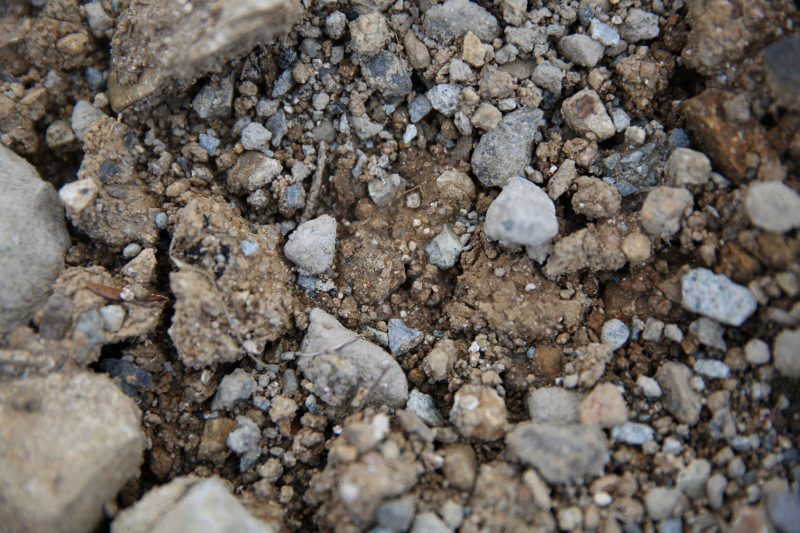