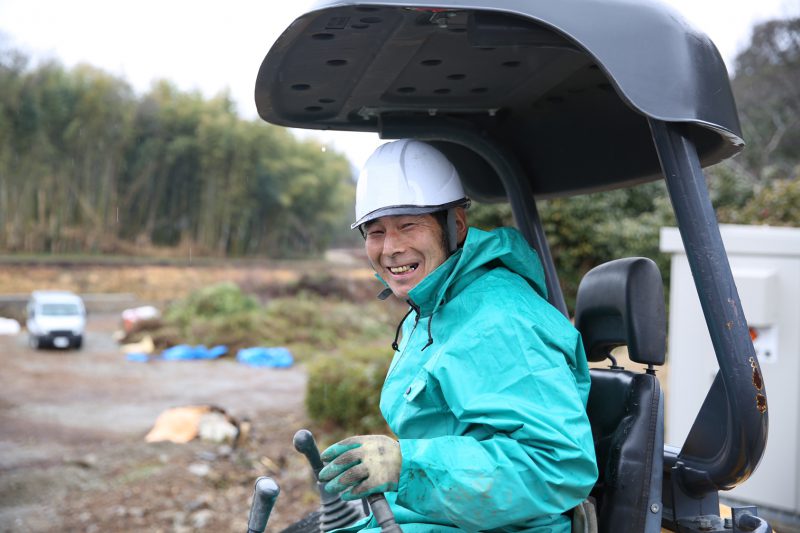 “If it is the best for the earth, then we must accept it.”
Ms Tamaki, who considers the standards of the Earth, a vast living organism of which she is part, met with Mr Tomonori Yano, the Earth Restoration representative, an association that promotes global environmental activities.

Did you have any discussions about what you wanted the project to be like, or were there any differences of opinion to carry out the Earth Regeneration project?


Tamaki
I didn’t say anything at all.

Tamaki
Originally, I heard that you couldn’t tell whether the land was in good or bad condition or how bad it is until you dig it up. I said, “I’ll let you do what you think at the site, and if it’s not good enough, I might say something, but basically, I’ll leave it to you. I said that, but I didn’t know what they would do. (laugh) …it was fun, right?

Tamaki
Eventually, it took us about six whole days to do it, didn’t it?

—— It didn’t finish after three days and continued. You had to finish the planting in front of the entrance to the shop before the guests arrived.

Tamaki
We wanted them to finish that as soon as possible. They did their best on the final day, and they went home. We decided to complete it at the end of February.

Mr Yano, based in Yamanashi, has been conducting the “Earth Regeneration Lecture” at tamaki niime and throughout the country. The lecture members were inspired and practised earth regeneration in their regions, mainly from western Japan.

Tamaki
When they held the Earth Regeneration Lecture, they had never had so many “students” gather together on this scale. It would have been done in a smaller area by a smaller number of people, so they wouldn’t have had this sense of unity to create something together. They said that they learned a lot from doing it in this style. I’m glad we did it.

—— It was also a new attempt for the Earth Regeneration Lecture.

Tamaki
There’s a bakery in Bizen called &BREAD that comes here for the “Hara-goshirae-kai”, and one of the members from Okayama went to the meeting for this Earth Regeneration Lecture went to visit &BREAD the next day. When I told him that I had been to Nishiwaki previously, he said, “What? Where in Nishiwaki?” I was like, “Where in Nishiwaki?” He said he was with Tamaki-san. I thought it was interesting that people who usually have connections elsewhere were linked and came together for the Earth Revival Lecture. I thought it was interesting. I felt that a chemical reaction was occurring among many different people. It’s completely different. I was making clothes and making soil. I’m looking forward to it. We also have to create for people, which is what we’re working on now.

—— Clothes, food, and soil. It’s like a genre-less way to connect people while sharing the core.

Sakai
I feel like it’s a kind of contemporary art that considers the earth.

—— The activities of the Earth Regeneration itself.

Sakai
Yes. If you look at the soil and the plants, it’s pretty interesting. It’s peculiar, and it’s really weird. It’s probably modern art with the earth in mind.

Tamaki
What Mr Yano is doing…

Tamaki
It’s his sensitivity, you know.

Sakai
I usually don’t like the marks when the caterpillar runs and the concrete gets dirty, and I’m the kind of person who points out outrageous things, but this time, I didn’t say anything, which is unusual. If you consider that to be modern art, it’s interesting to think of the dirt as part of the art. In that sense, through Mr Yano’s activities, one of the things I’ve been thinking about is that such places should be clean! Through his activities, I think my ego that such areas must be clean has been taken away. I’ve come to think, “Well, that’s okay.”

Tamaki
He usually gets mad when he sees tire marks on new concrete, and he is an absurdly meticulous person, but this time He didn’t get angry about it being messed up. I’m glad that one of his issues was removed.

Sakai
In the usual cases, the premise is to create beautiful things. In the case of Mr Yano, everything, including the dirt, is packaged as his art, isn’t it? If you think of it as a “pattern,” it’s a fascinating balance. It’s exciting, no matter how you look at it from various angles.

Sakai
Mr Yano’s theory is that everything, organic and artificial, belongs to the earth, so it’s not a matter of throwing it away or not. His idea is that if it should be digested in the land, it made sense to me if it’s there, when I heard that. When I saw the work, I thought it was a bit messy at first, but if it’s also a cycle, and if it’s one of their works, then it’s certainly interesting.

Tamaki
People say that we throw garbage in the garbage dump, but if you think of the earth as a single unit, there is no such thing as a garbage can, isn’t there? There is no place to throw away. Think of the Earth as a living organism, like a human body.

Tamaki
There may be a place to keep it, to store it, but there is no place where it can be positioned as a trash can, and you can’t erase “trash,” can you?

—— If there is an ‘inside’ and an ‘outside’, such as your body and the house you live in, and if you think of the whole earth as inside…

Tamaki
Yes, but where do you dump it outside? Then, should I take it to space? I don’t think so. I heard that Mr Yano has been volunteering for earthquake and tsunami relief efforts, and he seems to have strong feelings about it. After the Great Hanshin Earthquake, he was there as a volunteer cleaning up. And he told the landlord of the property he visited that he didn’t think it was all garbage.

Tamaki
So, he would like to return all of it to the soil and purify it. He asked if the landlord could permit him to do that.

—— … That’s a fantastic story. Did you already start the Earth Regeneration activities at that stage?

Tamaki
That was the first time, and he said it was the trigger. The landlord said it was a good idea at that time, and they are continuing their relationship. Since then, he has been going to see the land every year, observing the changes over time, to see if there are any strange toxins and if the circulation is working properly. So far, there is no problem at all, and I proved that this method could circulate adequately, so that was an excellent opportunity for him. That’s what he said. Because he confirmed that it was possible to recycle in this way, he said that he realized that he didn’t have to throw anything away and that this way of thinking became the basis of his current activities.

—— So the earthquake was the trigger.

Tamaki
That’s why I was so happy when he said that we should think about how we can make use of the large lump of concrete in our wastewater treatment facility instead of just destroying it and throwing it away. I’m looking forward to it.

Sakai
I guess so.

—— It’s something about the way you think…it changes your sense of value.

—— You don’t throw things away.

Tamaki
That’s right. There is no such thing as ‘garbage’ as long as it is produced.

Tamaki
It all came together at once, and I was like, ‘Oh yeah! That’s how I felt.’

I remember observing Mr Yano and the staff laying a strip of organic asphalt, a mixture of wood chips and asphalt, at the Lab entrance during the Earth Regeneration Lecture at the end of January. After listening to Ms Tamaki and Mr Sakai, it became clear why organic asphalt is so essential. Adding organic matter to the asphalt, which had been blocking the earth, is now being used instead of being thrown away so that the planet can breathe.
For three days from February 26, the “Earth Regeneration Lecture” was held again at tamaki niime. On the first day of the course, after the classroom lecture in the tabe room, we all went to see the previous work site around the Shop & Lab. We listened to Mr Yano’s explanation while observing the signs of change, such as the beautiful appearance of tiny mosses on the surface of the ground and the granulation of the soil as air and water began to circulate through the water veins. After that, medium to tall trees were planted, and the creation of a new water vein around the Shop & Lab proceeded.
The earth, which had been choked with concrete and asphalt, was opened up, and the roots of the trees grew supple, creating a water vein, and plants connected regardless of artificial boundaries. And the circulation of air and water is born, creating a comfortable environment for all life.
Micro and macro: I couldn’t help but be pleasantly excited when I realized that the Earth Regeneration project that started from the Navel of Japan, the base of tamaki niime, is connected to the earth’s entire ecosystem, a larger perspective. I’m looking forward to seeing how the shop and lab of tamaki niime will grow and change over the long years to come, surrounded by rich vegetation. 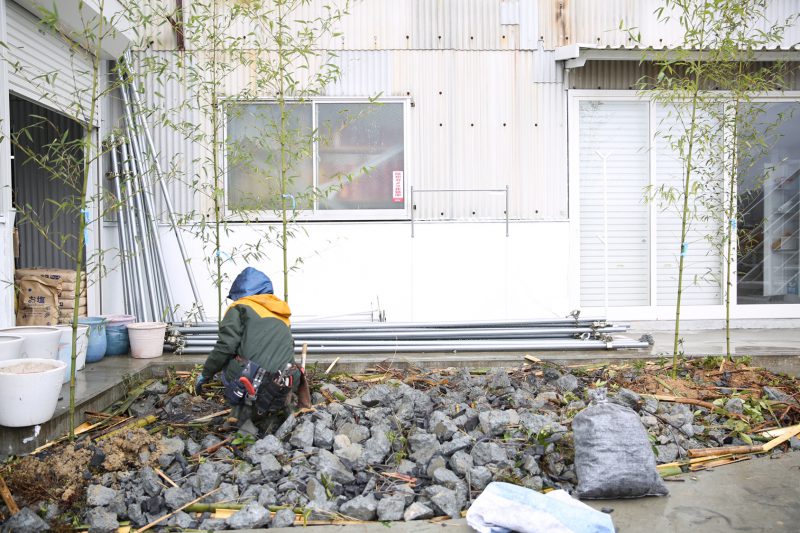