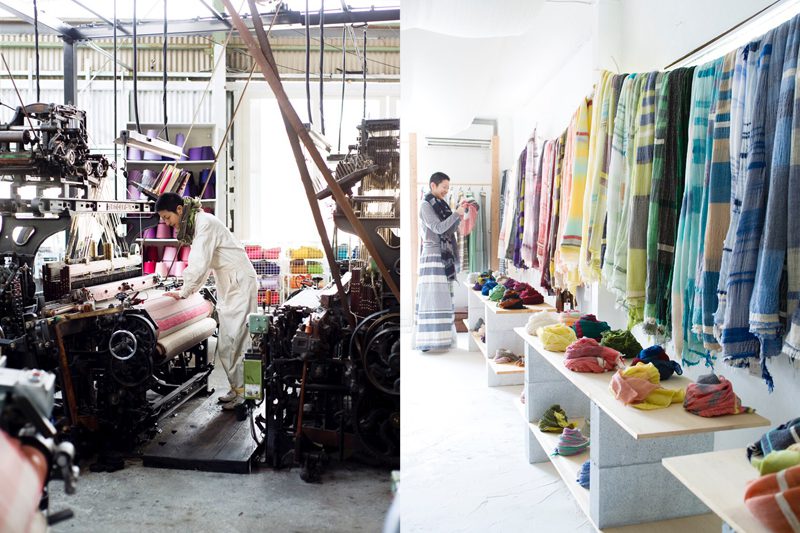 “Enjoy creativity and continue to explore earth-friendly things.” Recently, a term was expressed that encompassed the corporate philosophy and management guidelines of tamaki niime. They call it the “root”.


Ms Tamaki and Mr Sakai have built the brand “tamaki niime” together, from the time of its founding by sharing each other’s thoughts and ideas without words and putting them into practice speedily while always emphasising discussion.
Up until now, Ms Tamaki and Mr Sakai had individually discussed with each staff member about what tamaki niime should be like, encouraging them to learn through the daily creation. Still, as the number of staff rapidly increased due to company growth, each individual needed to align to share the core of their efforts. It has become necessary to establish foundation and guidelines as to the way of thinking as an organisation in simple terms.


“By sharing it with the staff, tamaki niime as a company can stride forward together in a single direction with a clear vision. First, we share the “root” with everyone and put it in everyone’s heart. It would be great if each of them could incorporate that into their own work. Based on the “root”, they would be asked to think about what they should be in the field of work they are working on and how they should incorporate it. How different it is from my current reality, and then I have to pursue what I have to do to complete it,” says Ms Tamaki.


Based on the “root”, staff pondered how to put forth their ideas, and then held a meeting where they listened and presented those ideals. This was followed by a frank discussion. By deciding on the words that represent the indicators of tamaki niime, the exchange became animated, with an awareness of the problems opening up. The differences were recognised, leading to a deepening of positive discourse.


“This time, we couldn’t reach the ideal form of tamaki niime, so we still have to dig deeper, but the staff suddenly asked me to pop the “root” part of us. Along with that, I have never had the opportunity to say what I should do in concrete terms, so it would have been a useful mental exercise, and that’s how the thinking circuit becomes active.”


Mr Hideaki Ohama, who recently joined the company, suggested to draw up the “root” of tamaki niime and it is connected to the sharing of consciousness and active discussion between the staff. It’s tamaki niime’s flexible and open style to listen to the ideas of newer staff and decide if it is good.


“The point I spoke with Ohama about must be the “root” that applies only to us. It shouldn’t apply to other companies, such as major convenience store chains.”


What is tamaki niime’s eccentric style?


As a writer, I met Ms Tamaki and Mr Sakai when they first introduced two belt-type power looms to their former Lab, which was a small remodelled warehouse, and began weaving Banshu-ori fabrics with their own hands. The unconventional method of the designers stepping into the realm of traditional textile craftsmen and practising creation, which disregards theory, is a big surprise not only to those involved in fashion and Banshu-ori but also to the general public living in the production area. At the same time, the novel approach was very vivid and above all, cool. A childlike curiosity and inquisitiveness, in an old-fashioned world.
And the impact of the appearance of the tamaki niime shawls, which overturns the preconceived notion of Banshu-ori. Soft, colourful, sharp and dignified, only-one-creation is what makes it unique in this world. I always want to create things with enthusiasm. Ms Tamaki has continued to pursue new possibilities of Banshu-ori stoically by flexibly making full use of her sharp observing eyes, analytical power, and extraordinary senses, without seeking to be buried by society.
Mr Sakai has devoted himself to building the tamaki niime brand so that he can create his own work with his unique creativity, information gathering ability, and artistic sensibility.
Unleash your creativity and move your heart to do what you really want to do without being bound by common sense. What they did contained a strong message.


After that, tamaki niime has achieved rapid growth as a brand and company. Since moving to the current location of “the Navel of Japan” in September two years ago, they faced the reality that values mass production and mass consumption while expanding globally via capitalism and tamaki niime’s attitude toward the creation which values “one-of-a-kind things.” Faced with this conflict, Ms Tamaki suffered and struggled for a while. Awakening to the global environment, she became vegan and found the answer to put the quest for earth-friendly initiatives as an extension of her own creation. They are convinced that they will reach the ultimate creation as tamaki niime and the ideal life as a person, after thinking about the earth as a living organism and walking straight according to the criteria of whether it is good for the global environment. I can feel their determination. The attitude of pursuing creation and the way the company should be are pierced by a single unwavering ideal. The natural appearance of Ms Tamaki and Mr Sakai, which gives off a lightness and freedom that is completely unbound, has not changed at all. In this world, without being bound by the traditional “common sense” of ordinary companies, the road to scrutinising each matter from the beginning, asking the earth, and creating a further “niime style” while judging is by no means flat. What kind of surprises and joys will be created in the future by sharing the “root” with the staff together with the two who continue to move forward with lightness and smiles so that difficulties can be turned into joy? I would like to continue to accompany the creation of tamaki niime, which has entered a new cycle, with the expectation that it will be exciting. 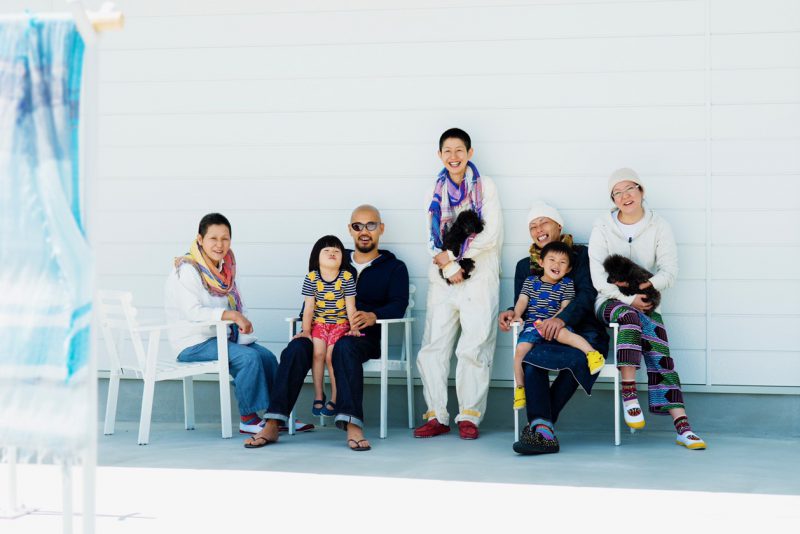