「初心に帰る。」
'Going back to the beginning.' 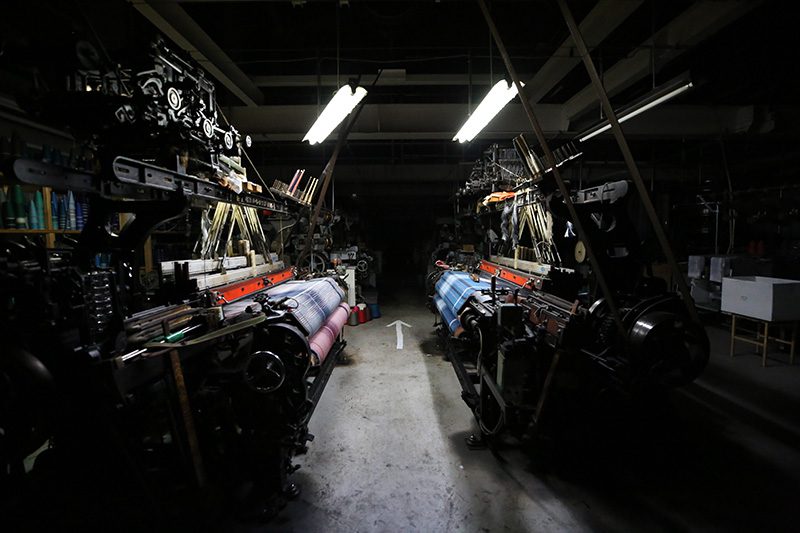 The “Zakkubaran-kai (open discussion)” was held on September 2. There, they invited the “Unagi no Nedoko (Eel’s bed)” staff from Yame City, Fukuoka Prefecture to work on solving local issues through creation. Tamaki was so caught up in her ambitions; she didn’t give herself time to engage with the people from Kyushu and their clear vision. Tamaki says that an “awakening” happened within her that night after the fulfilling event. Getting back to the roots. We listened carefully as she reflected upon the “awareness” she gained at the time, including about her position of manager.

Tamaki
I was sharp, wasn’t I, at the beginning? Not only anti-fashion but also anti-world momentum. Damn it, I’ll change it! That’s how I started with a lot of motivation, so I rarely listened to other people. We had the momentum because we continued to do what we thought was good without compromising. Still, as the number of people increased, we started asking for opinions from everyone, which is called “common sense.” The information came in like a storm. Even if I thought something was exciting and it was so cool, I started wondering if it was normal or not. Opinions like this have become very close to me. So, I thought I had compromised my beliefs. I knew that was the cause of slowing down our growth.

—— Don’t get caught up in ‘common sense’. First, try continuously pursuing your own ideas. If you feel there are possibilities, pursue your ideas to the end. It is the Tamaki creed. As staff increases, she listens to them, absorbing everyone’s opinions, but does that mean she unknowingly saved her attitude of herself?

Tamaki
Before that, we wouldn’t talk to anyone other than Sakai, and when we were making things ourselves, we would create new things that the world couldn’t really do or that only we could do! Because I was doing it with a fighting spirit, I thought it was good not to ask people’s opinions, and if I had to listen to their opinions I felt it was because of friendship. So my mind wasn’t sharp, and I thought that our company didn’t grow well because the tip was rounded. Even in manufacturing, efficiency has been improved, and the things that can be created are expanding. Of course, the brand is growing, but it is not the rapid growth that I envision, and I did not understand the cause. “I was the reason!” So it will be interesting from now on. I noticed.

Sakai
We have a staff member who has orange hear, so I proposed to put her in the shop. However, the other staff didn’t like it because she didn’t suit our style. They also said the customer would not have a good impression of us. When I heard that, I didn’t understand. Firstly, aside from fashion or customers, do we need to categorise in a place where we can express ourselves freely? I don’t care. I think that is one of the reasons why Tamaki said that we are slowing down.

Tamaki
Because it’s a group action. We’re not the only ones here, so motivation and the craziness of the site are also important.

Sakai
Yeah, we should be crazier. Everyone should be.

Tamaki
I don’t care how other people look at us. It’s important how we want to proceed. So, as a manager, I really regret that.

—— For example, even in the “Futatsu-kai”, there are always things that exceed our expectations. I don’t feel any slow down there, and I’m still entertained.

—— Are you thinking of a surprise to accelerate the potential of tamaki niime, including the staff?

Tamaki
It wasn’t good because it sold halfway. I mean I was on the defence. I felt that I had to protect it. When there were only two of us, we were doing it with such momentum that we could go bankrupt at any time.

Sakai
Yeah, the result was because of our rampage.

Tamaki
The numbers came with it.

Sakai
Yeah, I felt the numbers came, but without pride in ourselves.

Tamaki
I felt like we were going to do something interesting again!

Sakai
Oh yeah, I kept on trying, or I kept exploring. Well, the staff had to maintain the current sales on the site. In that situation, for example, don’t put an orange-haired person in that position. Isn’t that like a school rule?

Tamaki
I felt like it’s a “government office”. I thought it would be awkward if I followed the “common sense”.

—— As the number of staff increases and the organisation grows, something like an invisible bond occurs before you realise it. When you tend to think about maintaining the status quo, Ms Tamaki’s “consciousness” awakened.

Tamaki
I realised that if I only went halfway, it wasn’t good enough. So I went back to the beginning to when I created the shawl, and so did the staff education. And I’ve noticed myself in the last few years that I want to do this and do that, but there is also opposition to it. For example, if you think about the environment, whether the detergent used in my house is chemical or natural type. It should be a natural type, but at first, I started from the point of wanting to create soft things as part of creations, so I just care about that and want to make the creation look the same even after purchase. So the detergent I used was detergent that you usually buy at the supermarket there. At that time, I thought it would be better for the customer. However, when I actually started doing it, I realised that it was better not to use a major brand detergent, so when I decided to shift, I also experimented and compared the results based on various price. Because of the lack of softness, I settled on the fact that it shouldn’t be released as tamaki niime from a detergent.

—— So after you tried a natural detergent, you decided not to use it.

Tamaki
I think that’s because we didn’t understand enough and didn’t grasp it, however, right then, it was much softer using the existing detergent. Because we could express the softness of tamaki niime products, we ended up saying that we should stop changing. If we had another chance, we would try again. That’s what we thought. But in the end, I felt like it can’t be helped. I think I could have done it if I had done more, but I just ran away. “

—— So is it still an issue you left open in the middle of pursuing it?

Tamaki
Even if I don’t use wool, I’m not saying that I won’t use it right now or stop using it from tomorrow, but since I don’t eat animal products, animal products are in tamaki niime products. I told everyone that I didn’t want to use animal products as a brand, and I was against it. Let’s go with wool, of course, I still want to stop it someday, and I’m trying to stop. I’m doing it, but I thought it was warm. Well, some customers say that wool is good, so it’s not fair to deny that, so I ran away for a while. So, when I thought about what tamaki niime is about by what I learned then, on how to differentiate from other global brands, and how to proceed in the future, oh, I can’t go through that. I wondered what it was! I consulted with the staff about that area, asked if they wanted to stick with it. If I had to go to learn from that, I should go and learn more about it and dig deeper. I think when it still doesn’t work, but I’m always looking at only superficial things, and if the world ends up like this because it’s like this, it will become a half-finished brand, so I’ll do more about it one step at a time…seriously, and now I feel that I need to dig deeper.

—— In the process of tamaki niime’s growth, do you feel that among the various potentialities, the ones that are left unattended are issues that are gradually increasing?

Tamaki
Yes. It means that I gave up, just leaving it alone. When we were two of us, we never left it alone?

Tamaki
That’s it. I only thought about the thing. I’ll do it thoroughly, and if it doesn’t work, I’ll move on to the next stage. Without understanding, it’s best to end it with something, but I’ve done it. I think that’s because I’m not creating directly, so I have to make the staff understand it correctly, and I believe that the staff will also need that motivation. In that sense…innovation? Revolution?

Tamaki
It’s time to say goodbye to my loose self. I want to go back to the beginning. I decided to do so.

—— It may be a difficult path, but by sharing the issues with the staff and clearing them, you can grow as a team. I can imagine…

Tamaki
If so, for the first time, it will become a brand that I really want people from all over the world to come to visit us. It seems that there is only tamaki niime in the world. tamaki niime can only exist as tamaki niime. It’s not a gentle feeling, but a concrete and precise statement. As I felt at the “Zakkubaran-kai (open discussion)”, it’s possible for customers to come to see and tell all. I think it’s one of our strengths. The vision of wanting to do this through a process of thinking and content, rather than appearance, will be connected to a clean environment by proper communication with our staff. We must do what we can with a firm resolve. You don’t have to remain in the consumer concept of making and selling. What are we doing, and why are we doing this to make it meaningful? Of course, as a top manager, I have to explain it to everyone, but I have to reorganise it into an idea that gives motivation to the staff to explore the possibilities to create. That’s the conclusion, right?

—— What is the truly valuable path of tamaki niime as a brand? Tamaki and Sakai’s determination to create a path for the future by sharing their motivation with the staff, coupled with a stoic feeling without compromise or deception. At the same time, having the same sense of excitement and enjoyment, with the two swayings, I felt that I had touched the missing “core” again.


Next time, we will continue to talk about the “awakening” that she gained through the “Zakubaran-kai”, touching on the “Unagi no nedoko”. 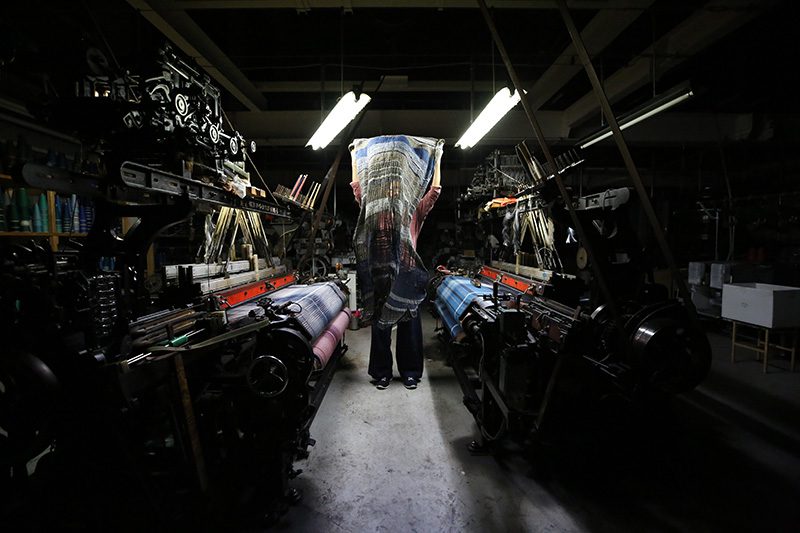