いざという時の「駆け込み寺」でありたい。
Aspiring to self-sufficiency - We would like to be 'a safe haven' for an emergency. 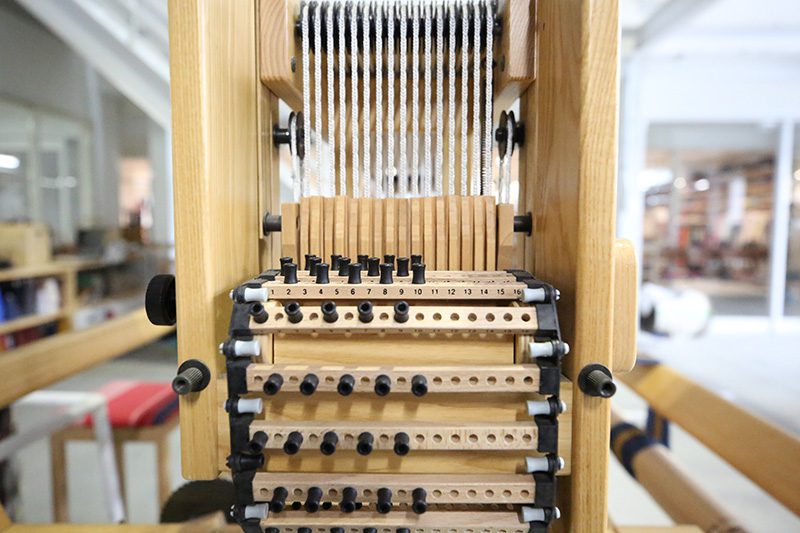 “The day will come when conventional things are no longer common in the society.” Running parallel with her creation, Tamaki, who has been aware of the dangers of the foundation of modern society with her keen sensibility, has started searching for a lifestyle to protect themselves which doesn’t rely on the systems that seemed to be conveniently solvable with money.

Tamaki
“Just before or after the Great East Japan Earthquake, I felt like I shouldn’t take normal things as a matter of course. It’s also true for the value of money. Because nothing has changed much since I was born. The rich have money. It was just a natural thing. Since we can get water anytime when we turn on a tap, we have no crisis mentality, or I should say no survival instincts. I started thinking that we would die immediately in an emergency. Of course, I wanted to create clothing, and working with pleasure is the fundamental principle, however, who knows what will happen in the world? I have a bit feeling that everything will be fine, on the other hand, when people are in trouble, we would like to be ‘a safe haven’ for an emergency. That’s been my vision. At least I want to protect our staff and don’t want them to die from starvation. We are too dependant on electricity. What if we have no electric power? So we want to leave a mechanism that allows us to make things even if the power is lost. That’s why it’s a kind of “preparation” for emergencies, even if you’re not using it now. We’re also collecting handcrafted weaving machines and the throstle frames to make thread by hands.”

-I see. That’s why you keep old manual machines.

Tamaki
“It’s challenging to start from the beginning. So we should prepare various tools for creation right now. Additionally, eating is a cycle; making, eating and making. I think it is crucial to grow vegetables by ourselves and eat by ourselves. Since I cannot kill animals, I guess I should be able to live without eating animals. First of all, I have to understand the plants and create a condition that I can grow them by myself. It is not just by me, but I want to make it a kind of community that all our staff can keep.”

-It might be linked to the previous story; you have a future vision that not a so-called company organization, is it more like a community, including livelihood?

Tamaki
“I don’t think it is a company at all. (laugh) Well, I don’t really know what I think it is. I wonder what a company is. Don’t you think?”

– When you are asked… what is a company… in the first place?  Right?

Tamaki
“I don’t think I want to be a representative for good. I don’t think I am a person in a high position because I am a representative. It’s not important to be called great now, but it is good to have me, ah, at the moment, for an emergency. Because the brand; the company itself has been that kind of presence to exist/be there. Large companies advocate an emphasis on ‘community-mind’ while being eco-friendly as well. I think it’s essential to promote as corporate PR to make dreams come true; however, that’s not our goal.  When it comes to the ultimate need, it is vital to be able to save people, and for that purpose, I would like to expand the techniques that I can do now and more. Initially, I started weaving because I loved creation. But now, actually, I don’t get involved in it so much. It’s because I feel like the young me back then is like our current staff. I don’t want to take their work; the excitement from the younger people. “

-Where the young “new sprouts” are growing …

Tamaki
“Did you get it? Including the difficulty of creation, I would like them to confront and try to create something new on a routine basis. If I’m side-by-side and give them more advice, their creation will not be for their own but to make me happy. That will not make them interesting.”

Tamaki
“I felt like I cannot think about textiles anymore so that I make an environment where they can dig into what they really want to make. That’s why now; the next … is the plant for me. Actually, I’m very excited. I think it’s because it is a missing part in our current ‘tamaki niime’ community, and by supplying it, we will be more fulfilled.”

Based on the unchangeable creation of Banshu-ori, Tamaki is pursuing comfort as ‘tamaki niime’ in now not only limited for something wearable but also lifestyle and community existence; a complete lifestyle.

Tamaki
“So I’ve been thinking so hard. … Am I awkward?”

– I feel the uniqueness of women and Tamaki’s original sensitivity.

Tamaki
“Like species preservation? It’s in danger in this world. However, I cannot live without particular distinction. It’s annoying for me just to sit and relax for good. I like a bit of trouble. I kind of miss it. (laugh) That’s my motivation in life. I feel good when I accomplish something. When we had a problem within our company, I’m annoyed. However, I have a sense of fighting spirit that inspires me. So if there is nothing to fight against, I get bored and start looking for something.”

– You mean that you are always looking for something that makes you get excited?

Tamaki
“Yeah, I like excitement and troubles. I don’t like people; however, I’d rather like something troublesome. As for people, it is not black and white in the world. For example, if there is a misunderstanding, men tend to have a face to face conversation. I wonder how it ends. They may be content if they can keep their justice. But I’m not so sure if they can maintain a good relationship afterwards. I don’t think it is a peaceful settlement. Unlike games, life is not so simple. We always have that kind of struggle. Of course, each person believes that they are going the right path. Hopefully, people understand it eventually. In the future, maybe after I pass away, I hope someone says Tamaki was right. That is good enough for me, I guess. Instead, I don’t want to resort to a cheap trick or eager to get results even if people would point at me behind my back.”

– What do you think about the growth of ‘tamaki niime’ as a company? It’s not good to keep selling the products, right? As you talked about it, the preparation for an emergency as well, I think that kind of idea will be crucial in the new era.

Tamaki
“Yeah, to push it through, we have to earn money.”

– It would be fantastic if you could build an efficient system as a community, even though it is a company organization at the same time.

Tamaki
“If we can handle this perfectly, that would be great. I think that’s the ideal. I can manage to do even if we have no money in hand.”

– Earning to realize your dream is, what should I say, making sense.

Tamaki
“Speaking in the extreme, it is not impossible to do something that other people can do. We can do anything, however, don’t you think it is important to choose what we do? It is important to decide what to focus on in our lives. It has to have meaning. It needs a goal as well. It is not allowed to say, “I don’t wanna do this anymore.” (laugh) At first, I didn’t think it in depth, so I started from my point of view; I wanted to know better and make something comfortable which didn’t exist. Since I’ve started that way, …actually I had a period to think about other people, to make them happy or to worry what they think about me; the time I focused on people… however, do you understand people?”

Tamaki
“So, I decided not to think about it. Instead, I’ve been concentrating on my future projects; the place I want to create, the works I sell; clothing, slippers, food, etc. I think it is wonderful to have a community where we can complete everything. That is my ideal space. Since no one has dreamed of such a ridiculous idea, it will be more interesting in the end. So I’m more focusing on it.”

– You mean company organization or creation?

Tamaki
“Both. Including farming, ‘tamaki niime’ has more potential; to stay only here or to expand to new places. What kind of possibilities do we have? And what will get us more excited? I think that it is also true for the customers to feel inconvenience, so far as it is only in Nishiwaki city. Where would be interesting? Where would I like to go?”

– Expanding outside of Nishiwaki?

Tamaki
“What if we expand into different places outside Nishiwaki? We have customers from eastern Japan; however, it is not easy for them to come so often. So we depend on department store sales, and it has become the leading sales. I think it is a waste of opportunity. I can imagine that it would be interesting to have more forefronts in different areas to let more people know.”

– Is there a possibility that the Shop & Lab will appear somewhere in eastern Japan?

Tamaki
“Sounds interesting. I hope so. But it also depends on an encounter. Finding a good place…”

– By focusing on your personal preferences and feelings rather than paying attention to others, I think more people will like ‘tamaki niime’ with sincere empathy.

- Actually, they already do.

Tamaki
“I felt fuzzy the other day. We usually have photo shootings for DM? Well, I saw a customer who was wearing exactly the same outfit (as myself) taking a picture at the exact same spot. Like, “This is it!” I was a little shy about it, but also I was happy to see it. Something I did connect to someone’s action, you know? If someone really likes it, I guess it is exciting. Since I’m excited at the shooting, I’d like the customers to get excited as well. I also would like to entertain them by starting new projects one after another. That’s what I always keep in my mind.” 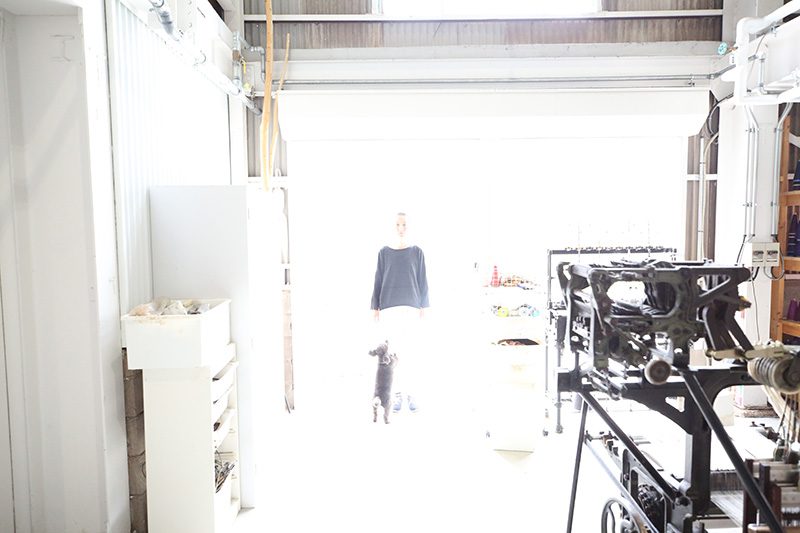