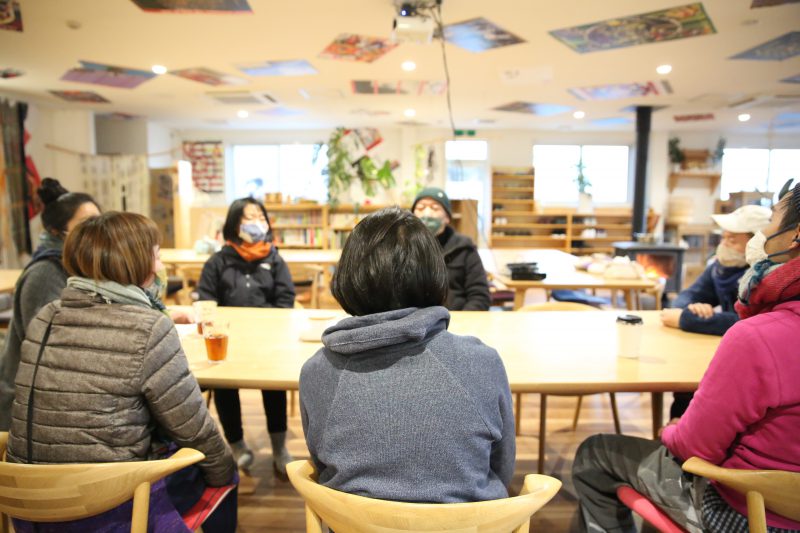 In 2021, this year, ‘tamaki niime’s’ newest team has officially launched. Their name is the ‘New Film Crew’. What is it? What are they going to do? I interviewed the six individuals; Shohei Kubo, Ryuta Fujimoto, Hideaki Ohama, Mutsumi Tamaki, Nagisa Ueda, and new member Keiko Inagaki during the busiest time of the new year.


—— The members of the ‘New Film Crew’ also belong to other teams, right?

Ohama
Yes, we do. No one works only for this team.

Kubo
First, we had the ‘film team’ who handled the overall shooting. The ‘New Film Crew’ came from the filming team.

—— You have excellent members in Ms Ueda of the ‘Weave team,’ Mr Fujimoto from the ‘Weave team’ and public relations, Mutsumi in management, and new member, Ms Inagaki.

Kubo
We mainly take care of video programs and make plans for business strategies. This team is specific in explaining our commitments for ‘tamaki niime’ to the world.

—— You plan out a branding strategy.

Kubo
Yes, we do. We make plans, write scripts, have photoshoots, edit, post, and share through SNS.

—— You are fabulous. Are you like the company advertising agency?

—— In the last interview, I found out the ‘Wa team’ covers a wide variety of jobs, but ‘New Film Crew’ seems to have more of theirs.

Kubo
I think so. I feel we made significant progress by setting up this team and making videos. Gathering staff from across the teams helps create an excellent environment to create various and thoroughly enriching programs.

—— They are selective staff from other teams. That’s why it’s possible to approach the target subjects.

Kubo
‘tamaki niime’ expresses themselves a lot by posting pictures and statements, but Ms Tamaki thought that was not enough, so we should have other ways to provide information.

Kubo
Other than that, as you know, Ms Tamaki’s interests have been increasing. It would be too much to post with just pictures and statements. I understand she thinks videos maybe the best way to explain.

—— That makes sense as you consider the amount of information.

—— Its great advantage is you can post them immediately.

Kubo
That’s right. Videos, which contain audio and visual information, allow us to explain quickly. I hope to improve our efforts using words and pictures to express these ideas, which helps, like enhancing the resolution.

—— I see. I interviewed each of you in the past, but I would like each of you to state what you do and want to do in the ‘New Film Crew’.

Fujimoto
I recognize that my role is to connect people on the outside.

—— I see. You have public relations experience.

Fujimoto
I want to introduce the people we have been working with and the things the boss feels good about into this team and suggest and make plans. For example, we connected with the people who knew about “Koshirae-kai” (* creation trial) and “Hara goshirae kai” (* meal trial). There are reasons why we invited them. I want to interview about why they connected with “tamaki niime”. To make plans to share the information, not just share it among the staff.

—— Do you have some details?

Fujimoto
One example is “The soap shop Reef” in which we feel great about their creations. I want to tell their story through the video. I wish we connected well with them.

—— Listening to what you said, I understand a little that videos are the essential tool to stabilize plans and send information.

Mutsumi
I think we each have roles. To sum up opinions, share them with staff, and check up the progress to keep working productively. We hope we ended up not doing it even though we planned it out.

—— I see. Mutsumi, I understand you are in charge of progress management. Ms Ohama, will you tell us, please?

Ohama
I belong to the ‘Wa team’. In my role here, I send pieces of information about “tamaki niime” to the people outside, or I give the information to our staff. I think I am here at ‘New Film Crew’ to be a messenger to deliver information about products. In a narrow sense, we take videos and send messages to the world. Generally, our members are the workers who are good at shooting and editing videos, speaking, or IT. But they don’t just work with videos. They work with their unique skills and thoughts; Fujimoto in public relations, Ueda in creation, Kubo in filming, Mutsumi in management, and a new member. I think they are so ‘tamaki niime’.

Ohama
As one of my roles, I work on making ties with staff, which was probably the beginning of making outside connections. We could visit “The soap shop Reef” which Fujimoto mentioned, “HANDMADE”, which gives us coffee, and the wholesale stores that have been supporting us from our early time, and talk and hear them to make connections. In return, we bring them “tamaki niime”‘s new something. I hope such works make new massive connections.

—— You want to work on extending connections.

Ohama
That’s why I will go more outside this year.

Kubo
He is the mule.

—— When was that? Did you begin making films when they had * ‘Nishiwaki gaku’?


*A class to learn about the city of Nishiwaki, Hyogo, Japan. On November 22 in 2020, the first class was held at Apica Hall, and Ms Tamaki was invited to give the first lecture. You can watch it on the ‘tamaki niime’ YouTube channel.

Ueda
Yes, we did.

Mutsumi
That was a little before the class opened.

—— You were the reporter.

Ueda
Yes, I was. Expressing with my characters, I was hoping to report with a natural excitement for the customers.

—— That seems perfect for you.

Ueda
( laughs ) But I was too nervous at that time.

Ueda
I was feeling a bit out of control.

—— You pulled yourself together?

Kubo
She tried to be a good girl.

Ueda
I got hung up about that I was in the frame. I couldn’t think of customers behind the camera. For 2020, I want to break my shell and be myself. I know being yourself is the best I do.

Ueda
I want to express myself naturally. That’s how I should be. ( laugh ) Please watch over me. I will move forward. ( laugh )

—— I see. Ms Inagaki, listening to other’s comments, what do you think? I heard you have just joined today.

Inagaki
I applied for this company with much interest; I checked out their website and Youtube, talked about the want ads, and saw the staff and had a good impression of them. My image for the company has been positive.

Inagaki
I thought that older women favour the ‘tamaki niime’ brand, but my misconception has changed. I feel the videos have the power to let the audience catch people’s feelings or the site atmosphere. Rather than writing, they can convince people with “silent voices.” I want to work on getting that.

—— Did you request to join the ‘New Film Crew’?

Inagaki
Well, when I worked as an intern, I edited two videos. While listening to Ms Tamaki, I thought about what I should select from her talk. And I thought it would be exciting if just a bit of her comment was a big hit.

—— Have you ever worked in editing films?

Inagaki
Yes, I worked through video shooting in college and as my job.

Kubo
We appreciate her.

—— All right. It looks like the team is out of order ( laugh ). But you sound like “tamaki niime” as I am listening to you. I feel you finally set up the ideal team, free from stereotypes and flexible like an amoeba, as Ms Tamaki mentioned. Videos are easier to express ‘tamaki niime’ because they can easily express important feelings and moments. They can show vivid facial expressions.

Kubo
I think so.

—— So, this medium is very suitable for expressing ‘tamaki niime’. Enriching the programs, I think you are well set.

Mutsumi
At the beginning of the new year, the boss asked us to decide what we want to do as the ‘New Film Crew’ because it would be vital for us to send messages even though not knowing how 2021 would be.

Mutsumi
Five of us had a serious meeting the next day. We could set our direction and where we wanted to go. We thought to ask the staff to take of as much video as they could. After that, we showed our presentation to the boss.

Mutsumi
We got her approval. We just started doing the project a few days ago.

Ueda
We worked hard together.

Ueda
We had a wonderful time.

Mutsumi
We have just started, and I know there are tons of things to discuss. I expect Ms Inagaki, with her new ideas and skills, could work well with Mr Kubo. I hope they fill in the blanks.

Ueda
They are great.

Mutsumi
That’s how we have restarted in 2021.

—— You are the ‘Renewal New Film Crew’, aren’t you? Did you mention that you asked other staff to shoot videos?

Mutsumi
I think each team, such as ‘weaving’ or ‘dyeing’, can make videos about what they want to tell. It is more effective that way. It would also be better with written messages because they can send messages with much knowledge and hearts. Ms Tamaki loves working together, so I want to ask the Lab team to shoot videos by themselves.

Mutsumi
Like every staff posts on Instagram, I hope to create the video from various angles of ‘tamaki niime’ with the staff’s different views and feelings.

—— The video would be an interesting one by differing views. Would the video be posted on the ‘tamaki niime’ YouTube channel?

Kubo
We have had ‘tamaki niime’s Daily Life’, with Ms Tamaki and Mr Sakai, and some staff as well. We have too many staff working at the factory. Not only are we unable to introduce all of the staff, but we are also currently increasing our staff who want to work with us even during COVID.

Kubo
As we have been saying, we need to take excellent care of our staff. We need to send information about the present ‘tamaki niime’ to the world. We haven’t posted all of our daily jobs to our customers yet.

Kubo
We are not trying to make programs with organized stories, but instead we want to express our lives, which is more human-like, in an old fashioned style even with newer technological fields. I don’t have any desire to take beautiful photos at all. (laugh) I even shoot videos if the images are out of frame.

Kubo
I want to shoot videos that the audience can feel the warmth of humanity. Right now, we collect videos from many angles, and I hope they could make us reflect on what ‘tamaki niime’ is. It’s more like a circle, not multi-directional. Overall, I want to focus on introspection.

Kubo
I want to focus on each staff’s personality in their videos. Shooting videos, taking videos, having your photo taken may sound bombastic or high tech.

—— But, you want to change that image.

Kubo
Yeah, just like blinking your eyes, I want people to feel through their eyes. Just like they watch with their eyes instead of a smartphone.

Kubo
There, we could finally reveal ‘tamaki niime’s’ lively creations.

Gathering the various staff from each team, through their lens, the ‘New Film Crew’ collects the vivid images of the daily changes that “tamaki niime” keeps while sticking their ideal and sending their message to the world.

Just like a fish in water, Kubo can’t stop talking enthusiastically. Next time, I will cover the staff’s stories who knew what to do after all the rewarding discussions.

Mr Ohama came up with the idea of “tamaki niime’s foundation”, which can be expressed that being simple is the essential core part of making brands.

I will reveal more next time.

Please look forward to the next issue. 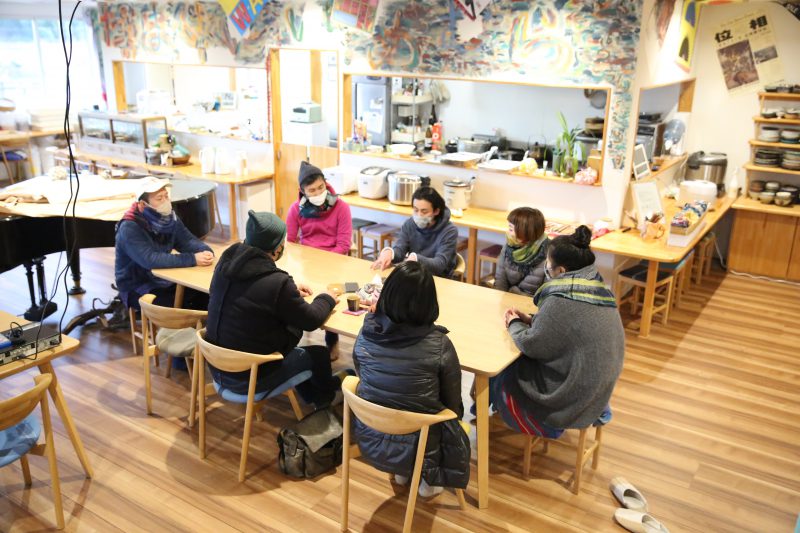