〈中盤〉
A frank and open discussion, the "Sew team." 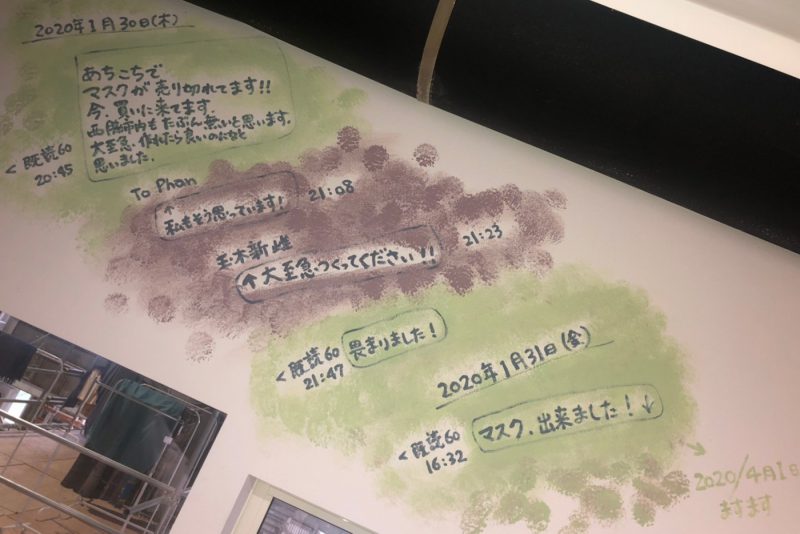 Continuing from a frank and open discussion of the “Sew team.” After Ms Miyazaki’s passionate discussion, Ms Kawabata waxed about her hopes as a leader, and we got off the track again! The truth of “tamask” is revealed to all from the sewing lab.

Miyazaki
I wanted to commit to stating that.

Miyazaki
Yeah, I don’t want to say it, though. I respect that everyone has their own pace, and don’t like to interfere in other’s business. However, since I have seniority and really want to develop young people, I feel I have a responsibility to be straight to the point with them, though I don’t feel very comfortable doing so. Well, I am not good at doing that. But, right now, with the team, I feel comfortable saying whatever I like to say.

—— Does she frustrate you?

Kawabata
When we work to shape the products, she gives us the best advice; good points that nobody else says. She advises us with her strong opinions.

Miyazaki
I tell them that I would do this way if I were you.

Miyazaki
I never push my opinions.

Kawabata
No, she doesn’t.

—— You just suggest another way.

Miyazaki
I sometimes suffered alone from not coming up with any good ideas, even after asking the rest of the staff.

Miyazaki
At such times, I went to the boss, and then she gave me great advice saying, “How about doing this way?”. She is quick, and that amazed me. As well, there are many amazing people here who have great ideas.

—— They could give you many other bits of advice seen from different angles?

Miyazaki
That’s right. There are a lot of staff here who have unique ideas.

Miyazaki
That’s why I try to speak out, telling them, “I really like it. “or “Look at it! It’s so cute!” with some criticisms as well. Other good advice could be added during my comments. For example, Ms Katake can do that, who is an expert at sewing (pointing at her). She is very good at doing tons using the same method of sewing.

—— She loves the job and likes to create a significant amount of items with great precision. I understand why she is so good at it.

Miyazaki
When I was in my 30s, the children’s clothes sewn were very detailed and nuanced, and I surprised even myself. I still do an excellent job of making the bag “Tamafukuro”, but it’s getting hard to work with such precision.

Miyazaki
Yes, it is. (laugh) I depend on many staff who are good at it. (laugh)

—— I see. Ms Miyazaki has been telling us that she feels worth or satisfaction in this job.

Miyazaki
I feel very rewarded to work here. The younger staff here are a bit better. They do an excellent job.

—— Well, the young leader, Ms Kawabata, what is your desires or what challenges do you have?

Kawabata
How long has it been? Since February or March, we have been working on “tamask”.

Miyazaki
She made her debut as lead when we started making them.

Miyazaki
Making the masks changed her.

Kawabata
(laugh) No, not like that. I simply had to have time to overcome them.

Kawabata
We had to make tons of masks, and a lot happened. Since starting an online shop, our product sales have dramatically changed.

Kawabata
Over there, Ms Miyazaki drew a picture: ‘The history of “tamask “‘. (laugh)

—— On the upper wall of the sewing room, there is a pastel-coloured picture which displays the conversations on LINE.

Miyazaki
January 30th, which is the day “tamask” was born.

Kawabata
Yes, that is the “LINE WORKS”.

—— That shows all our conversations on LINE at work.

Kawabata
If we humans died out…

Miyazaki
I hope someone could find this wall and decipher the history of “tamask”.

—— You hope there maybe someone new to decipher it.

Miyazaki
This is our true story.

Miyazaki
On that day, my daughter, who lives in the next city, Kasai City, sent me a LINE message to buy some masks, because there were none in the stores there. That evening I went to a drug store in Nishiwaki, and they told me there was none, even though people from Sanda City came to buy it. I was shocked.

—— Who sent this chat? “All the masks everywhere have sold out everywhere! I hope we could make them immediately. “

Miyazaki
That’s me. I just wanted to suggest it to the boss, so I did it through the LINE text.

—— Was that the trigger for making masks?

Miyazaki
Yeah, I did it on my way home from the store. I wanted to make them immediately.

—— Following your comment, Tu wrote that he had the same idea.

Miyazaki
Due to our boss’s decisiveness, the “tamask” was made in a few days.

Kawabata
The sewing team started falling apart after that.

Miyazaki
All our plans got messed up.

—— You were the first person to cause trouble? (laugh)

Miyazaki
That same day, the boss ordered us to immediately make the masks. So I texted on LINE to everyone, asking Tu and other staff if they had any excellent mask design ideas.

Miyazaki
I also searched. I wanted to create cute unique ones that were different from other companies’. I already had one that Ms Katake designed that we made together a year ago.

Kawabata
Next morning, when I was at work, 3 people came up to show me the samples. I can’t remember how we got that design of “tamask”. (laugh)

—— So, everything changed due to making the “tamask”, and you were appointed the leader in this challenging time, right?

Katake
The boss ragged on us about everything we did.

Miyazaki
Yes, indeed. But since we really started pushing the “tamask”, things became…

Kawabata
Well, I don’t know about that.

Katake
He tends to easily accept the jobs people typically don’t want to do, saying, “I’ll do it!”. It would be great if he did it right away.

Miyazaki
You can say that again. We wonder when you actually would get around to it.

Katake
He is still warned about that. After the state of emergency, we had to make a large number of masks for people who were waiting, but just the sewing team was not enough…

Miyazaki
First, we had just 20 or 30 masks at the store as a trial, which were made with denim.

Kawabata
I think so. They were denim.

Miyazaki
The NHK TV program “Ippin” came to cover us introducing our denim clothing so we were really excited and expected they would be a great hit.

Kawabata
We made a lot of denim items. (laugh)

Miyazaki
So we ignored the masks. I just wondered if we should put them on Instagram.

—— The NHK premier program “Ippin” featured Banshu-ori, and they covered tamaki niime. Do you remember when it was broadcast?

Katake
We started the online shop in early February, and denim items were a hot topic on TV. Even though we expected to receive many orders…but we didn’t.

Kawabata
We even made an online ordering page.

Miyazaki
We were all set! (laugh)

Katake
Then the Corona pandemic happened to outbreak around the end of February, and our mask orders increased. And schools closed in March.

Katake
Because of the urgent need, we really had to work on making masks.

Miyazaki
We already had an online shopping site, so we put the “tamask” there. Then, you know what? Suddenly we got so many orders without realizing what was going on. I remember that I said,” Am I in charge of masks?” Because we had no such team before. We just tried displaying them at the store, and suddenly …

Kawabata
(laugh) Then, many people came to the sewing team. Staff from other teams came to help us.

Miyazaki
On April 1st, the boss announced that we quit making shawls and would become a mask shop.

Miyazaki
For the time being, we worked hard in high demand. The masks on the online shop sold well. It became more necessary that someone needed to handle this mask business. Otherwise, we couldn’t keep moving forward.

—— Then, someone who could handle the situation appeared.

Kawabata
I didn’t intend to handle everything at the time.

Miyazaki
You know what? She was evident in her instruction, which was hard to understand at times.

Miyazaki
Even though she didn’t do it.

—— I think it may be essential.

Miyazaki
I think so, too. We needed a commander who guides us forward. I believe that we could work effectively as a well-coordinated group. And (looking at Ms Magome) after her cutting materials, we followed the order, “Everyone, sew together!!”

—— When you have the “tamask” project, Ms Kawabata turned out to be a perfect leader for the role.

—— Do you feel rewarded in this position?

Kawabata
I am in control of this project, just making production schedules. I think that the people in authority (looking at Ms Miyazaki and Ms Katake) are these two. I am not experienced and easily forget something or to tell something important. Even though I am working as a leader now…the Sewing job has so much to do or keep an eye on.

Kawabata
It was a handful to do all by myself. So, I assigned everyone to do tasks; I had Ms Magome for cutting, appointed Ms Katake to be the denim material leader, and Ms Miyazaki to be the creative lead. Since many things happened, I hoped we could solve the problems by discussing on how to improve them. Everyone is open in their opinions and complaints, which caused us to delay thinking and making decisions. I hoped we could adjust and improve that.

Miyazaki
Yeah, (looking at Ms Kawabata and Ms Magome) they took too much time moving forward because they overthought.

Miyazaki
But, Ms Kawabata changed after “tamask” productions started. I believe this job really fits her.

—— What made her so suitable for her position in mass production?

Miyazaki
The purpose of mask production is apparent.

—— Do you rather like focusing on one thing rather than doing many tasks here and there?

Kawabata
Yes. I’m like this. (placing their hands to the sides of their eyes)

Miyazaki
I am rather like this. (placing their hands to the sides of their head)

—— I can see the differences.

Kawabata
I can’t think of many things at once. I need others to help.

—— You put all things together or play a role in production management.

Katake
I think you are quite optimistic.

Katake
She wouldn’t care about other’s criticism when people are irritable.

Miyazaki
Yeah, she’s like that. Because she hums during overtime.

Miyazaki
My daughter often hums just like her. (laugh)

—— (laugh) At times when things get rough, we feel so much more comfortable being around optimistic people.

Kawabata
Ms Miyazaki created a new bag from the idea of “tamask”.

Kawabata
That has been a big hit.

Miyazaki
“Tamafukuroo “, that’s such a nice name, isn’t it?

〈 to be continued 〉


Some day in the future, this turning point in the history of “tamaki niime”, we may come to be reminded of their quick response to the Coronavirus Pandemic. When they made their “mask shop declaration” on April 2020 and created the “tamask”. I would like to keep this record of their lively discussions as important testimonies for the future. The “Sew team’s” passionate verbal sparring will continue towards its zenith. Please look forward to the final chapter. Possibly. 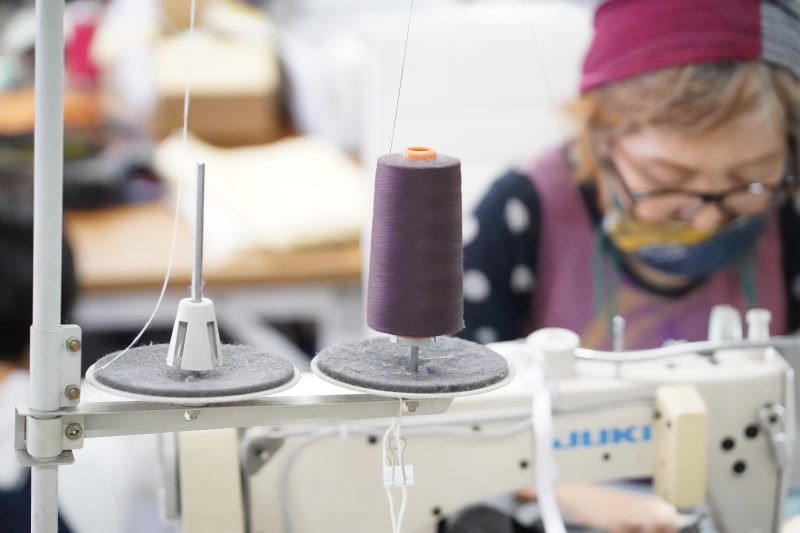