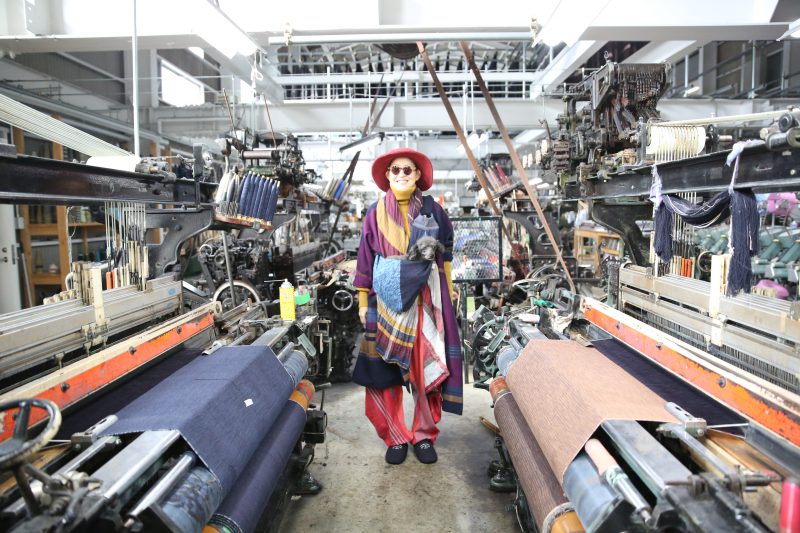 As the company has grown, Tamaki and Sakai have spent days going through repeating pondering and experimenting. And their minds have set up at their original starting point what “niime tamaki” belongs. For a new year; the beginning of the new cycle, we will send you a very open honesty talk without time limit holding at the end of a year and a new beginning year as part 1 and 2.

Tamaki
We had an incident recently, didn’t we?

Sakai
What did we have?

Tamaki
Yeah, there is a coffee shop where Hatsuko, Sakai and I had a talk and decided to go for making shawls.

Sakai
Yes, three of us, including my mother.

——You used to work as three of you.

Tamaki
There, I suggested we should go for shawls, and you agreed with it.

Tamaki
That’s how we focused on the single of shawls. That became our turning point.

Sakai
Yeah, it was absolutely our turning point.

Tamaki
That idea made us get into the zone to grow us. The other day, we went to the coffee shop, after how many years, I wonder?

Sakai
I think it’s been about eight or nine years.

Tamaki
We went there after a little less than ten years. And we were surprised that the shop was still there with nothing has changed. We had a second meeting with two of us at that time.

——Wait a minute! You may bring a new era again for your company.

Tamaki
We discussed where the future “niime tamaki” heads for.

Tamaki
What did we talk about?

Sakai
I will remember if you tell me.

Tamaki
We talked we should go back to our original starting point, didn’t we?

Sakai
We need returning to our basics.

Tamaki
Comparing ourselves to the time when we had only three of us, we were more hungry for spirits and passions. We are feeling halfhearted now.

—-Do you mean both Mr Sakai and Ms Tamaki feel that way?

Tamaki
That’s right. It’s nothing about our staff. I wonder where our passions are that we two used to have. Our ages may relate to how we feel now.

—-You think you had changed yourself from when you were young?

Tamaki
I noticed one of the reasons is that I have become a vegan.

Tamaki
I feel so exhausted lately.

Tamaki
I’m not in good condition. Well, I’m not sick. I don’t have to lay in bed, but I am not energetic.

Tamaki
Yeah. I’m tired and unbalanced. Since I’ve been a vegan for three years, my body may have been feeling limits for missing nutrients. When I became a vegan, I was suggested by people around me that it would happen. Now I understand what they said.

——You were predicted how your body condition might become.

——Because you haven’t had meat?

Tamaki
I think so. That’s the result of my experiment. My feelings and answer.

Tamaki
However, I should not eat meat physically yet. So, I ate a delicious egg in instant ramen noodles the other day.

Sakai
It was salt flavoured noodle, wasn’t it?

Tamaki
I craved for eggs in salt flavoured ramen noodles which I often made in college. We talked about returning to basics and connecting to how passionate we were before. Then, why did we lose our passions? It is because we humans are made by foods we eat, relating to our food lifestyle. I thought losing energy may be caused by my meals, and I thought of the foods from my days when I was young. And I tried to cook one by myself and ate it after a long time. I could only make simple cooking of salt flavoured ramen noodles. (laugh)

Tamaki
I cooked and ate it, and it’s fantastic! Guess what? I don’t say you could be a Goku being at Ultra Instinct but could be a Super Saiyan having immense energy by eating eggs.

Tamaki
I feel distinctly different when I wake up in the morning.

——Was Mr Sakai there at that moment?

Sakai
I can’t see her difference objectively, but she had it in herself.

Tamaki
Because she has no hair, her hair doesn’t stand up like Goku.

——Flames didn’t come out around her? (laugh)

Tamaki
My thoughts got changed internally.

Tamaki
I had been very conservative in the last few years. I restricted this and that. Do you understand what I mean? Everything had to be either good or bad since I made up my mind that meat was no good for me.

Tamaki
I had to teach myself that I shouldn’t do this and that. I am the type of person who wants to try anything, though. As I start counting forbidden things, I began to have more negative thoughts.

Tamaki
I thought it was dangerous. As we eat eggs, eating them is not bad at all, if we eat thankfully, it will give us energy. Anyway, if we eat the lives of animals, if those animals were raised healthy, we could gain health. In that logic, I don’t think any meat is ok. In my life now, if I list up the things I reject repeatedly, I would end up hating my business after all.

——You would become negative…

Tamaki
Yes, I would!

——You mean, by not taking animal food products, you lost aggressiveness in proper meaning in your case, Ms Tamaki?

Tamaki
I have become lacking in spirit.

——You become vegetal. Like, you prefer a less active role.

Tamaki
Yes. You could say that with my business style, too. If I had to take risks, I would rather not to challenge. I used to say that I would give it a try because it looked interesting. I found that I have changed. So I thought my judgement may have been wrong and noticed I need correction during our meeting at the coffee shop. That’s how I tried to eat eggs and noticed I could feel the difference in me. And one more thing…is it ok for you if I keep talking?

Tamaki
What should I do? I have many things to say…the first thing is my food recognition has changed, and I decided to keep chickens.

Sakai
It is Crow bone chicken, isn’t it?

——But you could keep chickens.

Tamaki
(looking at Sakai) He doesn’t like most animals.

Tamaki
You are ok with many animals.

——You are ok with small ones, aren’t you?

Sakai
Yes, I am. When they become larger, I don’t like them. And I don’t care for chickens much…but I like Crow bone chickens, they are cute.

Tamaki
I’m not asking your preferences.

Sakai
Yeah, and what is it? …you said you once were very weak, but later you gained so much energy.

——And is there one more thing you need to talk about?

Tamaki
Yeah, his salary was much less. We had time to live with 24,000 yen earning by making orders from customers. Until breaking through inventing shawls, we lived with 85,000 yen earnings.

Tamaki
You could live with that for a limited time until you set up a self-employed business.

—-As the training period, it is the “time to wait for success” while you learn how to do your business.

Tamaki
While we had spent some such years, we really enjoyed ourselves. Having risks in a sense, we were nervous about living each day, but we had felt alive.

Tamaki
However, since we have been carrying so many duties, we became an organization, not individuals, we had to have so much responsibilities to deal with. I thought being parents must have been feeling like this. My awareness of responsibility for protecting my company led me to choose to be a vegan.

Tamaki
The awareness that we have to prosper the company put on our shoulders as a “heavy-duty”. As a result of winning of responsibility awareness, we couldn’t enjoy ourselves.

——Your responsibility and sense of duty, bound yourselves.

Tamaki
Not just me. Sakai as well. As a result, we’ve lost an appealing quality about being the company and brand. Oh, it’s awful…that’s what we were talking about.

——I don’t think your company has lost an appealing quality (from outside).

Sakai
I think you feel it inside of yourself?

Tamaki
I am sorry, that’s in my head. I struggled in myself between having a desire to make “tamaki niime” enjoyable and my ideal to have a business that’s grounded.

——You had mixed feelings in yourself.

Tamaki
That’s why even though we had many more exciting ideas came up, we denied them and ended up not doing them.

Sakai
Yeah, we had.

Tamaki
We stopped many things because we couldn’t agree with the staff.

Tamaki
We used to try anything that seemed to be interesting, but now, we are not in the factory at present. Going through the majority decision system tends to let us go to uninteresting directions. Realistically it makes the company move to limit expected ideas. That’s why we have started struggling to break through the issue recently. So what can you do? We’ve been asking our staff to make things interesting. We thought about what they could do, and forcing them to do it amusingly. (laugh)

——I could tell Mr Sakai was not happy for a while.

Tamaki
He looked unhappy, you know?

——Actually, you told me you were not excited.

Tamaki
But you have changed a little after the meeting.

Sakai
I felt like having a symptom of burning out, being lethargic.

Sakai
It is not a matter of money. Our income now is more than ten times our first income, which fact doesn’t make anything meaningful. The profit of 85,000 yen or 24,000 yen was not the matter, and we were just so excited to have this business, that was very different from how we are at present. 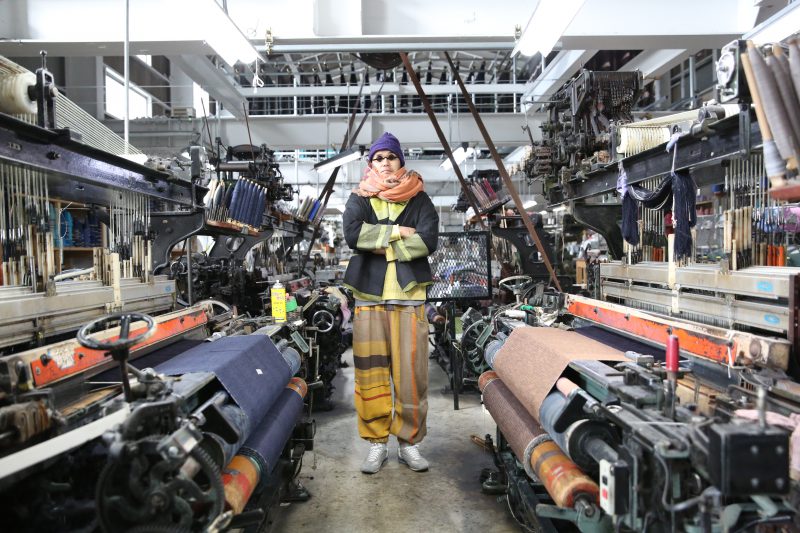