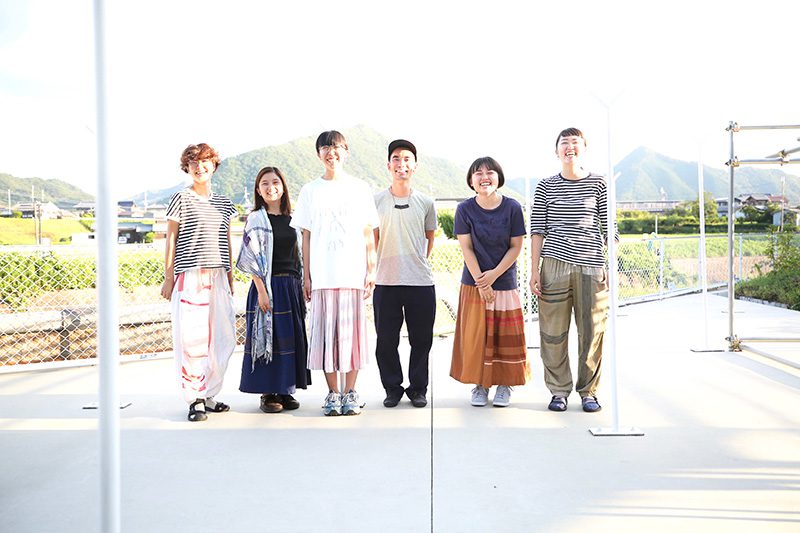 The Shop & Lab 2nd Relocation Anniversary Event “tamaki niime ‘Futatsu kai’” will be held for 9 days from Saturday 11th to Sunday 19th of this month. It’s been a year since ‘Hitotsu kai’; the first-anniversary event was held.  It was full of a relaxed, natural atmosphere not only inside the shop but everywhere in the lab with the men and women of all ages enjoying the festival. I would like both Tamaki and Sakai to discuss this second-anniversary event ‘Futatsu kai’, which will be held intentionally during the Bon period.

Tamaki
I wonder how this ‘Futatsu kai’ is going to be like. The previous event ‘Hitotsu kai’ was in September last year, and it was only three days.

-Why will it be held ahead of schedule in the middle of August, during the Bon period?

Tamaki
There are so many people who come back to Nishiwaki during the Bon period each year.  We consider if we should open or close our shop during that time each year. One of our staff said that many people come back to their hometown of Nishiwaki during the Bon period and New Year, who would want to visit our shop and lab.  So we should be open. We should hold a special event so that more people would visit us with their families. Since the parking was totally filled for three days at the last ‘Hitotsu kai’, we should have extra days and more content for our second event so as not to overcrowd the event.  That’s how we decided to have our second-anniversary event during the bon period.

Tamaki
Since various collaborations started this year, it is a great opportunity to show those at the event.  Like, inviting artists or creators for each day.

– As ‘monozukuri’; creation, it may be denim or sneakers…

Tamaki
Each of them brings and shows his or her collaborated creation as well as their original creation.

Tamaki
Also, we will hold ‘Hara goshirae kai’ daily; which we usually have every weekend, during this event.  So we hope everybody enjoys every day.

– ‘Hitotsu kai’ Last year was a really open event, wasn’t it?  Not only at the lab but also at the retail area was opened to everybody.  Even a mother and her child were playing there. ‘tamaki niime’ relies on an open-minded policy, and the event has an inclusive atmosphere, which was quite amazing.

Tamaki
Last year was the first anniversary, so food was free as hospitality. We started off with the desire to more people to come. However, for the 2nd anniversary, we would like to show our new things which are started doing past a year, including the food event ‘Hara goshirae kai’; the food creators from various areas come to our place to cook food that you cannot usually eat.  So it is not free this time.

– Yes. It means that it is the opportunity to eat and evaluative the food creators work.

Tamaki
Last year I wanted the people who did not know ‘tamaki niime’ at all to come, well, just walking casually to explore.  Though, I watched throughout the year and noticed that many customers come with their family. Especially on Saturdays and Sundays, there are many cases that grandmother and children are here to spend time with their mother. That’s why we may have more families to come during a summer holiday and are planning to have activities like collecting keywords game, swimming pool for children and etc. to make children happy every day during this event.

– Of course, while showing the active Shop and Lab; the intact ‘tamaki niime’, right?

Tamaki
Besides that, it adds a somewhat summer vacation feeling.  Since we have more new employees this year, we call it ‘the newcomer project’, and they are organising this event such as a collecting keywords style game etc. Of course, all the workers are going to work on the event during this period.  However, the newcomer team is mainly in charge of the planning of the event.

Last summer’s event ‘Noryo kai’; the summer night festival served to greet the residents of the surrounding villages, leading to this event.  At that time we had a pool for children and shooting, etc., and a lot of children came over and really enjoyed it.

Tamaki
Also, another event “FOLKLORE and Miu Sakamoto’s live show” will be held in the lab in the evening after working hours when it gets cooler.

– It is a hot season, so it is understandable to see the schedule that distributes event contents so as not to be as crowded as much as possible.  It will be a really productive nine days, won’t it?

Tamaki
Well, I kinda want to try something ‘nonsense’ in a way.

Tamaki
All the staff get together and work as one for this event.  Usually, since each member does their own part, for example, dying, weaving, washing, selling etc.  Separately, they don’t have the chance to interact with each other even though they work so close to each other.  Usually, it will be for each department to get excited as team players. However, when it comes to an event like ‘Futatsu kai’, we can intentionally mix the staff from different departments to get to know each other better. Newcomers are usually don’t have the right to decide things, but now they can take leadership of this event like a school festival.  Besides, we can observe how they move irregularly and their relationships. I hope this is the chance for young people to learn.

– “Nonsense” may be paraphrased as “playfulness”, and I feel it is crucial.

Tamaki
When they are excited, why do they get excited?  The staff who usually only talk about serious work matters in the lab will have the chance to speak frankly to the customers about some lighter topics. They also may listen to various opinions and views.  So we would like to hold this kind of event at least once a year to have such opportunities.

‘Futatsu kai’ has a somewhat similar purpose to ‘Hara goshirae kai’ to the point of letting the staff have a more rich experience at the Shop and Lab as well as doing some irregular works. Now let Sakai talk about ‘Futatsu kai’ with his own unique view.

Sakai
Hitotsu kai’ was a simple summarisation of our daily work to show to the customers.  And this time we would like to upgrade it. However, when we think about the variety of corroboration, we are not doing the corroboration for the ‘futatsu kai’.  The corroboration is the main part to share. Since many people are coming, we would like to show our contents. ‘Hitotsu kai’, ‘Futatsu kai’ and even ‘Mittsu kai’; the third-anniversary event, are going to be like a ‘tamaki niime’ circus, I guess.  We don’t have animals, though.

–  That’s nice. It seems exciting and surprising “acts” will come out one after another.

Sakai
I hope everybody enjoys it with such a sense.  An actual circus does not directly interact with customers, but our circus will interact with each other.

– In the sense of excitement?

Sakai
It’s a sense of expectation. When I go to events in other places, I see a distance between the sellers and the customers.  I don’t like it. I hope people come to our place just like visiting someone’s house. For example, visiting a relative once a year.

Tamaki
Didn’t you go somewhere during the Bon period?  With your family? Maybe to your relative’s house?

– Yes.  Spending time, relaxed and lying down.  It was comfortable.

Tamaki
Spending time with your cousins?

Sakai
The contents of it are, of course, fluid and it will change in many ways.  We may quit. We are not sure. That’s how it is so far.

– I felt a casual and relaxed feeling at ‘Hitotsu kai’ last year. You opened it all over for everyone to enjoy where usually the working space is for the staff.  That flexibility was amazing. Furthermore, it was filled with a natural atmosphere.

Sakai
That was the feeling that farmers can comfortably stop by on the way from their farm.  Casual.

Sakai
But we don’t want to be too local to this region. We prefer to be somewhat new and be popular in the region. To put it simply, like at home.

– It is understandable to know what kind of approach; visiting relatives house during the Obon period.

Sakai
When they visit, just like, saying come inside and drink some tea.

Sakai
We want to create a casual atmosphere. Even if we make a scenario, like jumping out to make people surprised, it depends on the customers how they react.  For example, if the people are well dressed and find out it is not the place that they expected. On the other hand, you’d be surprised to find it was a formal place.  Basically, if the performance is great, but if I’m not so excited, I would not be impressed. Even if the scenery is not so good, it may move some people to tears.

– That all depends on the relationship between sender and receiver.

Sakai
So, if you go to a relative’s house and your uncle or aunt serve you tea, you may think it is nothing special, you may still appreciate it. Or maybe you say… wow, this tea is delicious, where did you buy it. Like that.

– On preparing the best event as ‘tamaki niime’, it will depend on how the customers enjoy the event.

Sakai
It is like a circus with no rehearsal.  So it will depend on the staff themselves on how to perform there.

– There is no scenario there.

Sakai
For me, both ‘Hitotsu kai’ and ‘Futatsu kai’ are something like that. I’m sure that ‘Mittsu kai’ will be too.  I’m not sure how it will evolve or change, I hope to make a fun time and space to continually create.

While preparing various kinds of amusement for ‘Futatsu kai’, they leave some room for the participants to enjoy in their own way.  That’s exactly the way ‘tamaki niime’ creates an exciting event for everyone. What kind of event will it be like? I cannot wait to see it. 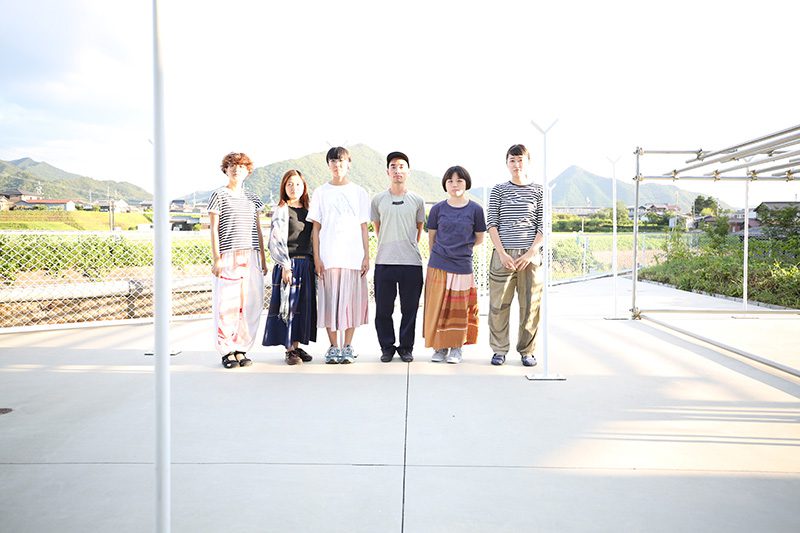